Low water levels in the LDV so far this autumn has concentrated the birds into Wheldrake Ings. It is a pretty spectacular sight particulary if the geese and Wigeon get up off the Low Grounds to the north and move on to the Ings, as happened shortly after dawn on Sunday morning (4th December). My quick visit revealed Peregrine and Marsh Harrier, 25 Ruff, several Redshank and a solitary Whooper Swan. I think the couple of pairs of Stonechat from the other week must have drowned in the brief big flood early last week! The sun was too bad to check to see if the trio of Scaup were on the refuge. 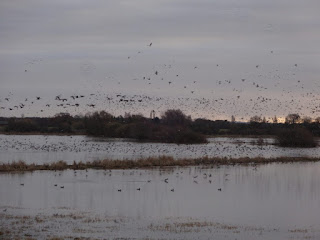 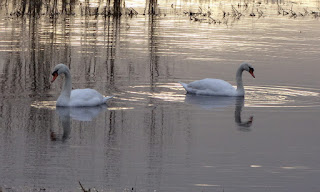 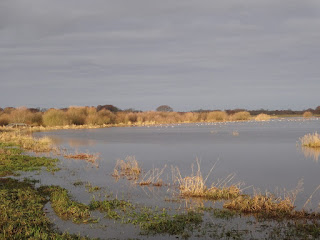 The Autumn that Keeps on Giving!

News of a Dusky Thrush somewhere in Derbyshire on Sunday afternoon set my pulse racing; an almost legendary bird that I longed to see in the UK. The location was revealed as Beeley, just by Chatsworth House, the bird was a first-winter male and definitely not a hoax. A slow Monday passed at work enlivened by texts from Dob who was chasing the thrush round Beeley.

Too excited to sleep, Tuesday's dawn arrived, well, apparently it did, but it was so murky I couldn't really tell if it had or not. Shortly, I dropped the kids at school and headed south into the fog, spurred on by news from Tom that the bird was still present!

I got within six minutes of Beeley - according to the Sat Nav - and then to my horror I came across a 'Road Ahead Closed' sign. Not the first time that has happened this year- see here. Doh! I was on a minor road, in the fog and having been following the Sat Nav, had no idea actually where I was. 20 minutes later and I was starting to get a bit anxious but after travelling through the grounds of Chatsworth House, the Beeley Church appeared in front of me - I recognised it from Google Earth! Thank the lord - literally. Found a spot and gleaned the news from other birders that the Dusky Thrush had last shown at 9.30am in hawthorns adjacent to the kids play area. I could see these from where I had parked so had a scan. No sign, though a few people were getting a bit excited by the Redwings...

After a bit, I wandered down to check out the orchard. A couple of hundred birders were on two sides of the little orchard by Dukes Barn Activity Centre and two lads were re-roofing a hut. The resulting noise of all this gave me a rather negative feeling about the chance of the bird showing here again. This was where both Dob and Tom had seen the bird well, but I felt it was unlikely now. I spent a bit of time between here and the original bushes, but with the passing minutes rapidly turning into hours, a slight feeling of despondency crept into me. The fog was not too bad, but overhead gangs of Redwings and the odd Fieldfare headed over, mostly lost in the murk. The bird would have only had to flick across a field to another hedge and it would be lost. I had to keep positive and hope that it was set in a routine and loyal to this village. At about 12pm, I got the news - probably twelfth hand - that it had shown well on the bushes and then in the field next to the play area about an hour ago! Oh no! Well, at least it was still about. Somewhere.

After a sausage cob (what they call a bap round here) courtesy of Dukes Barn (three bangers for £2 - bargain!) I decided a stake-out of the play area bushes was in order. It seemed quite a few others had opted for this too, as the bird had not been seen in the orchard since early morning. 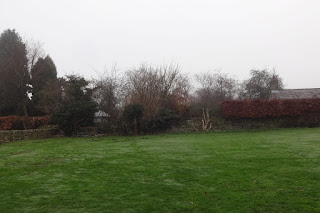 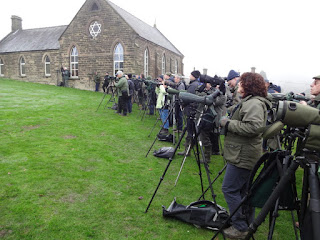 I bumped into Andy Hood and we were just chatting when suddenly someone shouted 'There!' and sure enough the little belter had dropped in to the top of the bush and was sitting right out in the open.  I got my scope on it, let Andy have a look and then drank in this Mega bird. It dropped to the edge of the bush and started feeding. 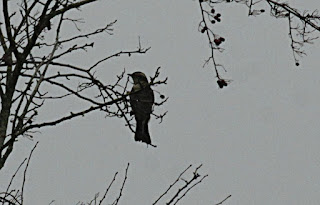 My first photo of the Dusky Thrush, with the DSLR against the fog!

Definitely well worth the wait, and a massive relief. The bird was much whiter underneath and on the face than the nearby Redwings (less dusky ironically!), with nicely scalloped underparts consolidating to form a blackish upper breast band, setting of the white throat nicely. It sported a a lot of white on the face and the big Super, contrasting with dark rear ear coverts, making this quite a distinctive bird. It flew along the hedge and landed again, proceeding to feed on the hawthorn berries, against the dark of the bushes. With this background, the colours could be seen better, with a nice gingery secondary panel being obvious. After a few berry-gulping minutes, it flew off. The relief of the 200+ crowd was palpable and there were a lot of big smiley faces around, not least mine! 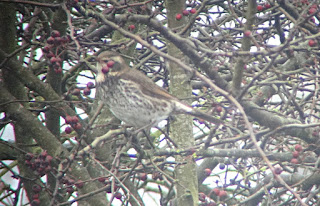 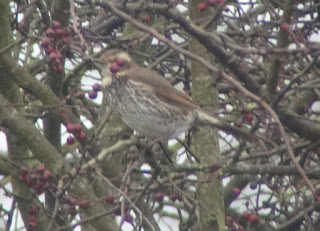 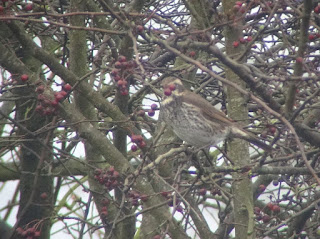 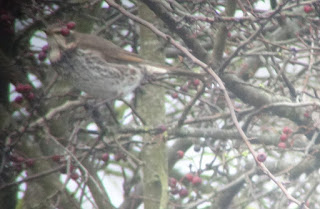 Pretty poor shots as per normal. I need to not get quite so excited when I see a rare, so my hands don't shake so much.

By 1.15pm it was all over and having given it another 30 minutes I thought I would check the orchard out, make a donation to Dukes Barn and reward myself with a brew. The Dusky Thrush was thinking the same, and did a quick loop of the orchard before heading back into the fog. I never saw it again.

A couple of Ravens over, two Nuthatches and plenty of common stuff also noted.

Big thanks to Rachel Jones @lilwag for putting the news out originally, the friendly folk of Beeley who welcomed us all (and coped with the craziness of a mega twitch) and especially the staff of Dukes Barn who were so welcoming. A great bird, a great twitch and a spectacular finale to the Autumn that keeps on giving!