Up and at 'em early - it was my birthday - and was soon enjoying a beer on Chalk Bank for breakfast. Following this, the sky filled with Wheatears, as a fall happened. We counted over 50 around Chalk Bank, including 14 sitting on one patch of rocks on the beach and six in a line on the telegraph wires. Crazy! 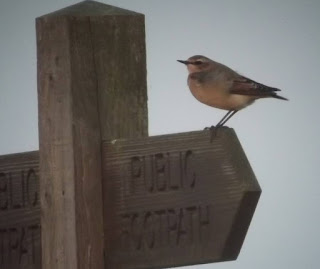 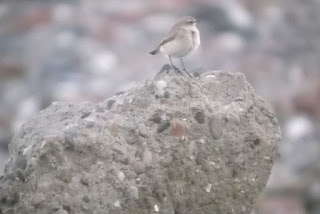 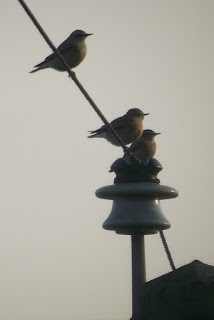 We then went to Sammy's Point where yet more Wheatears greeted us, with at least 32 in the horse paddock and 12 in the adjacent field. I checked every one, but sadly the Black-eared wasn't playing ball. 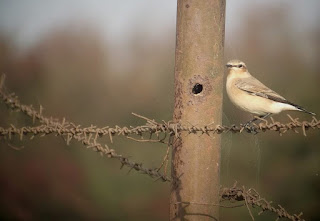 After a snack, we popped into Canal Scrape, which lasted literally two seconds as the radio crackled 'Whiskered Tern off the Narrows'. Yikes! We scrambled into the car and shot down there. I was soon on the Little Gull flock and picked up a Black Tern. Reg then had a look through the scope, and we both decided we couldn't see the bird so headed up the track to see if the others were on it. After a bit of confusion it turned out the 'black tern' was the reported Whiskered. The views were not great against the bright sky, but the bird looked all dark, with white ffrom the throat down the belly and round it's neck. This didn't look like a Whiskered, but also looked wierd for Black Tern. Then Adam Hutt cleared it up stating 'it's an American Black Tern!' Soon an Arctic Skua barrelled in flushing the flock high into the sky. Although they returned, the tern never came as close, being very distant, so I couldn't get any more on it.

This was quite a surreal end to a fantastic four day weekend. The Sandhill Crane never did fly on to my list, but great birding in great places with great company more than made up for it. Thanks to Richard at Flamborough and Andy/Adam at Spurn for sorting us radios and Kat and Craig for putting us up/up with us!
And a good bird finally came my way...