To twitch or not to twitch

It is always a shock to find several text messages, missed calls and emails on my phone late afternoon, and once I had had a look I realised that Andy Gibson had found an Isabelline Wheatear at YWT Spurn. Doh! No chance of me getting there before dark, so will just have to change my plans for the morning and head down the Humber. During the evening I began to get real pangs of doubt about going for this cracking Yorkshire rare. I had planned to go to Flamborough in the hope of finding a Sibe Accentor. Joining the crowds at Spurn certainly wouldn't help this.

Anyway, by the time I got up at 6am, I had decided that the Izzy was a bird I really should make the effort for. Shortly, I arrived at a murky Spurn and was ushered into a space by Andy, who had already texted me to say the bird was still showing along the Humber shore. I bumped into Tony Martin with his mate Mark, and we strolled up the road. We soon arrived at the scene, spotting Tim Jones and Chris Gomersall who I had planned to travel with already watching the bird. We quickly got on the bird, which was feeding energetically on the beach. What a cracker! 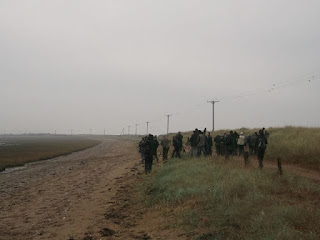 Even at a distance and in the early morning light, this bird looked great, very pale, upright with a stand out black alula, pale wing coverts and tertials, white fore-super and amazingly long black legs. The tail which was mostly black with white base-sides, was wagged forcibly, a bit like a Pied Wagtail. After a while, the bird took flight, looped round the line of birders on the beach and landed nearer the Warren. We moved position and the three of us on a hunch decided that if we hung way back from the line of advancing scopes, if the bird was flushed it may well return to where it started. A little while later, a car flushed the bird from between the opposing ranks of birders and sure enough, the bird looped round over the saltmarsh - underwings and general overall bird looking very pale in flight against the dark Humber mud and dropped on the shore 20 metres away, where the three of us got our closest views. Soon the other birders arrived and the Wheatear moved further up the shore again. It seemed this cat and mouse game would continue, so having had some belting views, we decided to go off and look for our own stuff. 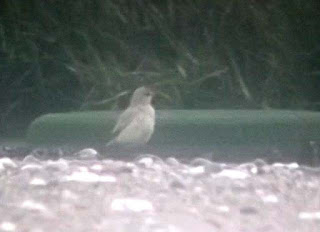 My temporary 'scope aint that good for digiscoping! Also, I managed to bust my bins today too. What is it with me, Spurn and optics? Some awesome shots were taken by Ian Smith yesterday - here

Hordes of Redwings, Fieldfares and Blackbirds were coming in off, along with several Woodcock, a couple of Snow Bunts and a Brambling. Others reported Twite, Lap Bunts and a Short-eared Owl. A walk round the triangle was enjoyable and full of birds, but no other rares showed up. Tony and Mark headed for Sammy's Point, and I did a spell on the gate. At 11.20 I decided I best get back, so despite the fantastic birding to be had, I headed back west, to York. 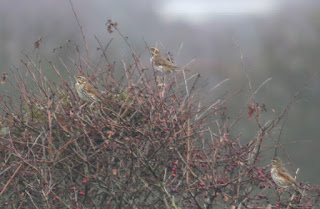