On Sunday, during the bird race, John B saw a Buzzard from Bank Island looking north towards Cheesecake Farm. He took a couple of record shots. The bird had pale breast and head, bright white Goshawk-like undertail coverts and a square black belly patch, sharpy demarcated from the pale areas. The upperparts appeared solidly dark, with no white on the coverts or mantle like in many 'pale' Common Buzzards. Later, we got brief views of the bird sitting on a hedge before flying off. In the brief flight view I was disappointed with the tail which appeared not to be Rough-leg like. 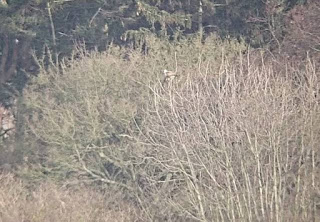 On Tuesday, I was in the area enjoying the wildlife spectacle that is Wheldrake Ings (21 Shelducks, 23 Pink-feet - see photos below) and I thought I should see if the buzzard was about. I popped into Bank Island and saw the bird in the same spot. This time, it was sitting side on and slightly closer and identified it as a Common Buzzard, due to structure (tail longer than wings, no shaggy trousers, large prominent bill, not particularly long wings in flight etc) and plain brown upper tail colouration -see photo. It is interesting that a Rough-legged Buzzard was reported in flight within a mile of this location a couple of weeks earlier, presumably this bird.

Click Here for a Rough-leg I found near Yarmouth a couple of years ago. 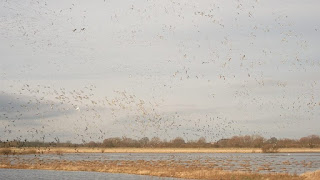 Wildlife Spectacle - The effect of the canon going off...