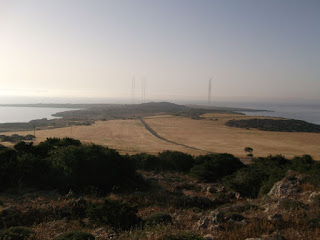 Up early to hit the Cape, my mind full of Bateleurs and Hypocoliuses. The weather conditions were not too inspiring, but this would be my first taste of Cyprus birding proper. Having checked out some suitable areas yesterday afternoon, I headed straight to the seaward end of the big fields and decided to work a circuit inland to the ridge and back.

Leaping out of the car full of anticipation I was greeted by a cacophony of calling Chukars and Crested Larks. Three small birds flew off the track into a bush - Ortolans - nice! A churring warbler crept on to the top of the same bush - a male Spectacled Warbler and first of many. 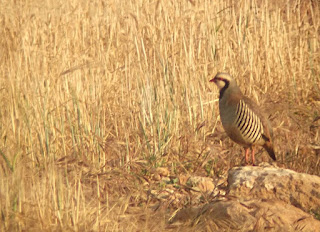 I walked towards the ridge, pausing to scope a covey of Chukars on the path. Attractive birds.
As I watched,z a pale pipit walked into view - a Tawny. Spectacled Warblers sang all around and I suddenly noticed another bird on top of a bush - a Red-backed Shrike. This was heaven!

I became aware of a persistent 'zit' high over the barley fields - a Zitting Cisticola, emitting a noise that would accompany me during my Cyprus birding trips. 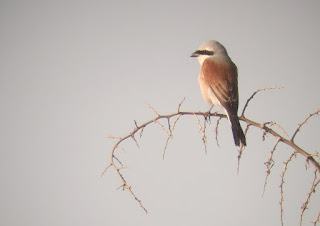 I headed for the ridge. Bird on a bush - smart male Whinchat. Another bird on a bush - Red-backed Shrike. Another bird on a bush - spanking male Eastern Black-eared Wheatear. Onwards, more Chukars and Spectacled Warblers. A Nightingale sang briefly from thick cover. I was hoping this might be a Thrush Nightingale, but sadly not this time. The day began to warm up. Red-rumped Swallows and Swifts sailed across the ridge at close range. A falcon appeared and obligingly landed on the telegraph wires. Just a Kestrel!


Nevermind. A few moments later and a bigger raptor came in off the sea - a big streaky immature Goshawk looking really unfamiliar in the Mediterranean sun and really puzzling me for a few moments.More Spectacled Warblers and Crested Larks. 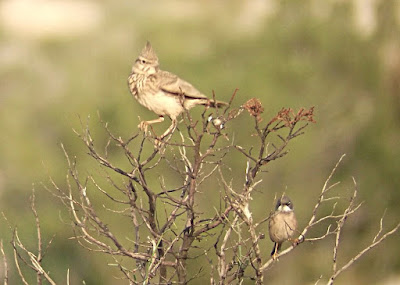 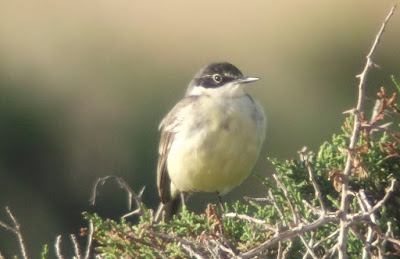 Two Willow Warblers moved through the bushes adding a touch of the familiar, while a rasping female Black-headed Wagtail dropped in out of nowhere and landed on a bush, next to another Red-backed Shrike.

Then I spotted a pale bird on a bush across the ridge - surely not - a female Masked Shrike! A bird I was really hoping for in Cyprus but not convinced I would see. I was doubtful I would get near to where they breed and wasn't expecting a migrant! The bird seemed to be taking a bath by flopping about with it's wings spread on the dew-soaked bushes. At first I thought something was wrong with it, but shortly it had a bit of a shake and then started to hunt. A lovely bird. 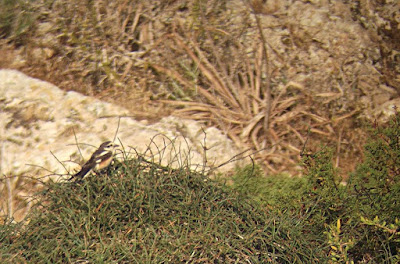 I wandered back to the car a little delerious, adding a trio of Spotted Flycatchers, another Whinchat and more Ortolans to my tally. And it was only 7.30am! I munched a bit of pitta and a banana and headed up the headland to have a look in some different habitat. Near where the track down to the head proper leaves the road, there is some stone pine woodland. I thought this would be worth an hour.

It was starting to get warm. Most frustratingly, I immediately could hear an Eastern Olivaceous Warbler singing like a clunky Reed Warbler, from the depths of a thicket. It was just impossible to see! I begrudgingly continued, adding several Turtle Doves and more Spotted Flycatchers to the notebook. I headed onto a grassy slope, where a bird that flicked up on to a wire proved to be my first Cyprus Wheatear. Nice, though I wanted to see a male really. I became aware of a pickup heading across the grassland straight towards me. Here we go, I thought. In the minute or so it took the vehicle to reach me, I thought at best I am going to get an earful for trespassing, at worst they may relieve me of my bins and scope. The two burly looking Cypriots barreled up to me in a cloud of dust. The driver opened his window and said "You must be very careful, there are lots of snakes here." He rolled his window up and drove on, leaving me somewhat perplexed. It is true that the Cypriots are the nicest people! I didn't see any snakes.

I flushed a Tree Pipit next, which flew around calling, reminding me of October on the east coast of Yorkshire. Then my previous bird of the morning was eclipsed when I clapped eyes on a stunning male Masked Shrike. It was very confiding, hunting from the top of some dead twigs, and catching a couple of grasshoppers. What a belter and a fine end to one of the best couple of hours birding I have ever had. 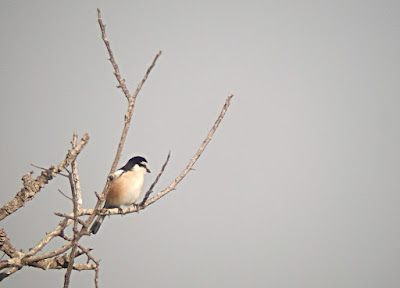 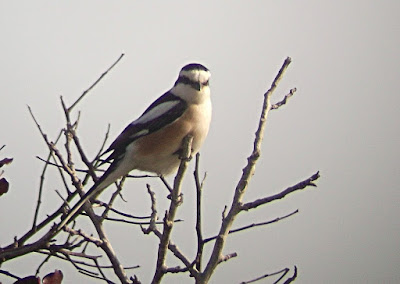 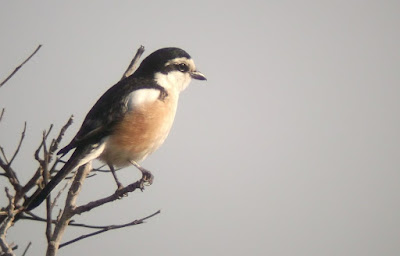