Bright and sunny, so shot up to Wykeham Forest for a second try for raptors. Arrived to a deserted viewpoint, but much better conditions than the last time I was here, though the air was quite shimmery in the distance. Being a spanner, I had forgotten my gloves. Not really a problem on a normal sunny late March day, but this being the longest winter ever, it was Baltic!

Not much action until 10.30 or so, when a pair of Buzzards got up in the valley to the left. Another birder picked up what he thought was a Goshawk but I never got on it. A little later and a few more Buzzards and I picked up a large Accipter quite high over the trees. Though distant, the big 'cross shape' and bulk showed it was clearly a Goshawk. While trying to get the other birders on it, they picked up a second Goshawk, presumably the male of the pair. The two showed for a few minutes but never came closer.

All eyes were thus focussed over to the left. A few Siskins zipped over, and a couple of Curlews headed along the valley. More Buzzards. I happened to glance straight out and picked up a much closer female Goshawk complete with Persil-white undertail puffball. I got the others on to it quickly and then one of them shouted that there was a second. The two birds circled up together, with the male doing some stiff wingflaps like a short-eared owl. They were still fairly distant but you could make out the vague plumage details. I stayed with the monster female and watched her doing her thing for about five minutes, before she headed off northeast.

By now, I was losing sensation in my fingers, so I decided to call it a day. Just before leaving the remaining and recently arrived birders suddenly shouted that they had a very close Gos. I got my scope up on the circling bird immediately - female Sparrowhawk...oh well, hopefully they saw the real thing later. 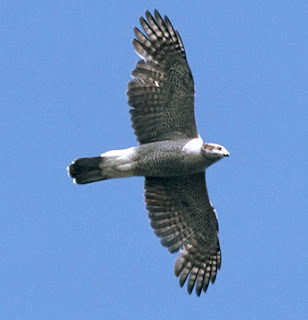 I borrowed this awesome pic of a Gos from t'internet. It did not have a credit - thank you if it is yours!