Tomorrow will be the funeral of friend and fellow birder Russ Slack. He died following a short but terrible battle with liver cancer. I will miss him and my thoughts are with his family.

I had known Russ since I was young York birder though didn't really get to know him until I had actually left York and was living in Cambridgeshire. In 2002 I started a birding website indybirder.com mainly to promote sightings at Grafham Water which I was doing as a patch at that time. One of my mates produced a parody of one of Russ's articles called 'The Whitby Brent'. I posted this on my website and shortly afterwards saw Russ at the Birdfair, where I expected an ear bashing. True to form as I would later find out, Russ thought this was hilarious and there began our friendship.

We kept in touch a little through helping proof read some of his pages of the first edition of his classic 'Rare Birds - Where and When' and our annual catch-ups about the York birding scene at Birdfair. A few years later and I was returning to York. Russ proved to be really welcoming and kind, giving us loads of advice about living in Wheldrake, how the local birding scene had evolved etc and got me straight on to the local grapevine.

Unbelievably, only a couple of short years later he is now gone. I will treasure the birding we shared together in those places I know are close to both of our hearts, such as Wheldrake Ings and Flamborough and his absence will be felt in these places for many years.

I remember heading east for a seawatch in October 2011 at Flamborough. As dawn broke, the conditions were great and I had a quick look from just past the lighthouse while waiting for Russ to arrive. 15 minutes later I had recorded over 100 Sooty Shearwaters (an incredible start) and was literally effervescing when Russ turned up, who shrugged and said "Well, let's hope it picks up a bit". Brilliant!

A particularly enjoyable and memorable day was the Mike Clegg Memorial Bird Race which we did together in the York area, with John Beaumont and Andy Walker last January. A day full of good humour, pragmatism, great local birding and the best company - one to treasure.

I miss you mate. 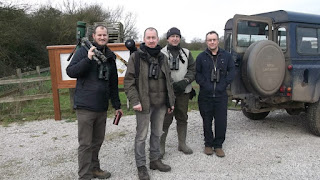 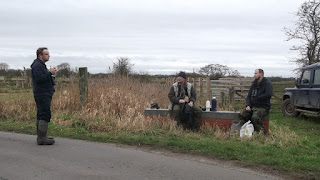 Above: The motley crew at Bank Island, Jan 11. L-R Andy Walker, me, John Beaumont, Russ Slack
Below: Russ in this shot is probably reminding us of how good his very expensive thermal wellies are.