We had a fantastic boat ride off South Uist, via Barra, to Oban. We saw:

Emperor Moth- 1 landed on the boat near Barra. 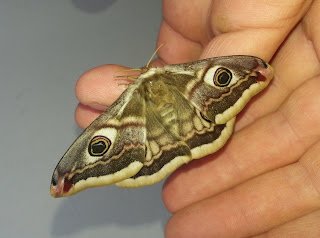 Back on the mainland, the sun was shining and it was c26C by the time we got to Glasgow - wow. On we went to Hartlepool where we successfully twitched a showy Thrush Nightingale on the putting green. Quite a subtle bird, ignoring the streaky flanks and spotty throat, it was quite dull dark brown lacking the mellow rufous of Common Nightingale. The tail was was dull rufous and in the dull evening light didn't really contrast with the back. I failed to count the primary tips although I did try! The yellow gape line was distinctive and the bird lacked Nightingale's eyering. 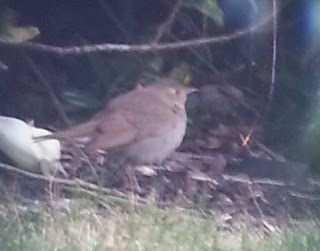 Post Script.
So, the northwesterlies picked up and an impressive movement of skuas happened the following day. Then the male Snowy Owl turned up again right where we had been. And then worse, the Harlequin was refound. Bugger. Nevermind, I wouldn't have traded it for our view of the first Long-tail and those close Poms plus finding that Lark...well, maybe!
at May 30, 2013