When Chris Gomersall rang me at work yesterday, I knew he must have found something good. I was assuming it would be a gull of some sort, as Chris spends a lot of time with the gulls at Rufforth. American Herring Gull was what sprang to mind, so when he told me he had had brief views of a male Pine Bunting at Dunnington, I nearly fell off my chair! 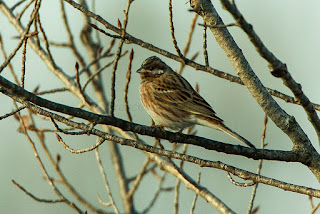 This is still a mega rarity in the UK although it has been a superb autumn for this species in Europe with some small groups having been found wintering. Local birder Terry Weston had reported a large flock of Yellowhammers on Thursday and Chris decided to check them out. I am glad he did. He saw the bird only once and for about five seconds but was confident enough with the identification to release the news. I was stuck in work and wouldn't get chance to try for it today. Saturday is my son's football practise, #birdingdad, so following an anxious night, I had an even more anxious couple of hours before I could get to the site. My wife substituted me early, at 9.20, forty minutes earlier than I had expected, so wasting no time, I jumped in the car. As I departed, Chris rang to say they had just seen the bird - FANTASTIC! It was still present. I raced to Dunnington.

A little later I arrived, slightly surprised to see only a dozen birders on site, most of whom were familiar local faces. They were all in high spirits having just seen the bird. The field was alive with Yellowhammers, with Reed Buntings, Chaffinches, Tree Sparrows etc for company. The angle of view made things difficult as birds flicked out of the stubble - where you couldn't see them - into the hedge where most landed out of sight. After a few tense minutes, I suggested we all walk round on to the footpath, where we could view straight across the field into the hedge and trees where the buntings were perching when  not feeding. 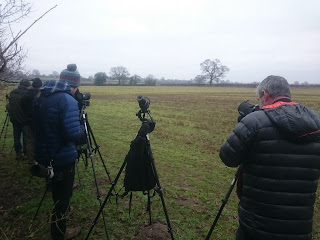 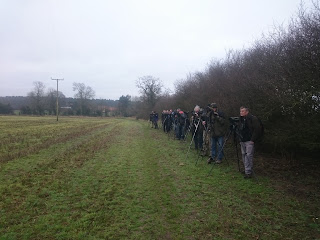 This proved to be a good move, and shortly I picked the bird up, sitting side on in an Ash tree. What a corker! It had a lovely rufous face, with a bright white cheek stripe. The underparts were largely orangey red. I was so stunned by this stonking bird I could barely get the words out. After ten seconds or so, it dropped back into the field. Most of the birders had got on it, although most of those present had seen it at 9.20 anyway. Minutes later and a birder called it again. It was perched up in the same tree on the top. After half a minute, it flew off with Yellowhammers and perched in the top of a large Oak in the hedge two fields away. It stayed here for a minute or so and I risked a bit of video, although I needn't have bothered as it was distant and in poor light and my hand was a bit shaky. 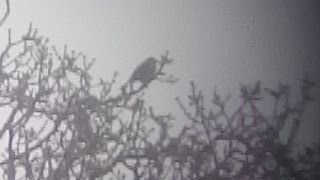 Birdguides photo of the week

Shortly, it flew off. Something had clearly upset the flock - a Kestrel as it turned out - and the birds flew around high up in a flock before dispersing. We spent the next two hours walking around but failed to see it again. I left at midday, heading home for #birdingdad duties, elated. This is the rarest bird to ever have been seen in the York area. Well done Chris!