I met Tom Middleton on his patch today, a small coastal valley at Ryhope, just south of Sunderland on the Durham coast.

On Wednesday, he had done his usual walk round his patch, full of expectation due to the easterly wind that was blowing in across the North Sea. He hadn't seen much before a fast-moving warbler caught his attention- he hoped for a Yellow-brow. As he raised his bins, a movement in the middle of the Elder bush caught his eye, and he found himself looking straight at a small owl. Having only seen Tawny Owl on his patch before, this was going to be a patch tick.

He got some photos and then the bird's head turned to face him revealing ear tufts - a Scops Owl! His hands began to shake and the net photo completely missed the target! He had found the first Scops for Durham - cracking! (The warbler was a Chiffchaff).

This tiny owl showed well to several hundred visitors that day, and again the next day, although it had moved roost and was difficult to see. Yesterday, the bird was not seen and I assumed I had missed my chance to see this cracking little vagrant; it had either moved on, or died, I assumed. Remarkably, today it was refound back in the original Elder bush.

I had an unexpectedly free afternoon, so hooking up with Chris and Paz, we cruised up the A19 to Ryhope. A short walk under the railway and the assembled birders were clearly still 'on it'. After a little bit of searching, there it was - lovely. What a super little bird. It stretched a bit, yawned and half-opened it's eyes, before going back into a doze in the dappled shade of the Elder. A little later, the sun came out and it seemed to not like the light, so turned it's head away - very cute.

Nearby, a Spotted Flycatcher performed, a beautiful migrant, accompanied by a skulking Barred Warbler, from Eastern Europe. Wow! A little later, we had a look at the sea, where a Red-throated Diver, complete with a mostly-red throat loafed offshore and a few common waders were roosting on the rocks as the tide rose. We bumped into a young lad who we chatted to - he then mentioned he had found this bird - this was Tom, and he generously told us the story of his mega find. Good work Tom! 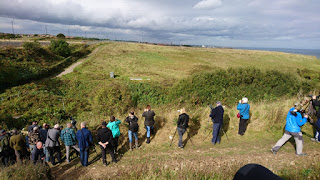 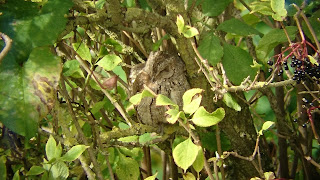 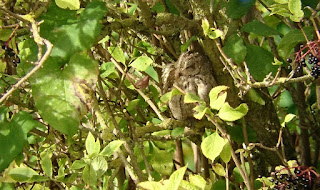 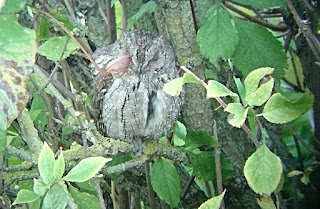 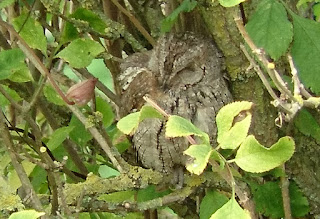 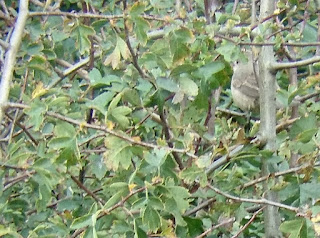 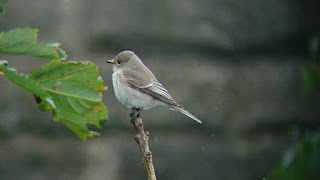 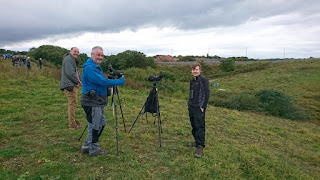 Paz, Chris and on the right, a very happy Tom Middleton

pleased you got to see it, theres been loads of folk up from York. Toms a pretty new birder to the area - I wonder what else he can conjour up !