Anyone for a Sandwich?

It has been a gloriously hot and sunny May Bank Holiday weekend! Two early morning birding sessions in the LDV have been incredibly enjoyable, with some quality birds, but sadly lacking that big York bird...until today! 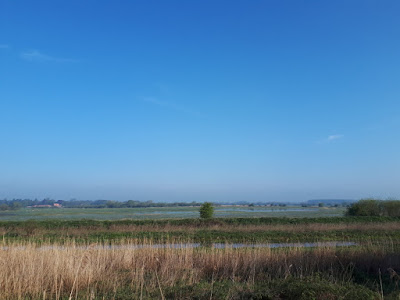 Blue skies over the refuge at Wheldrake Ings.

The highlights were: the Great White Egret at Wheldrake which continued to show well, either in front of Tower Hide or on the Low Grounds; several Garganey around, most of which are males as it appears the ducks have become a little more 'secretive', Whimbrel at Ellerton Landing, four Ruff at Aughton Ings, three Cuckoos (Hagg Bridge, East Cottingwith and the Low Grounds), stacks of common warblers in the valley, including the first Gardens of the year, Swifts, hordes of Little Egrets and several Common Terns. 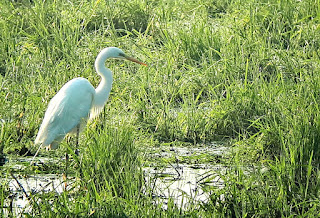 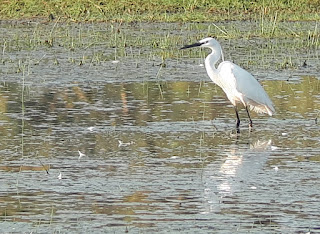 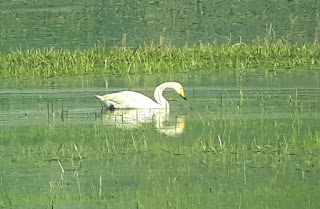 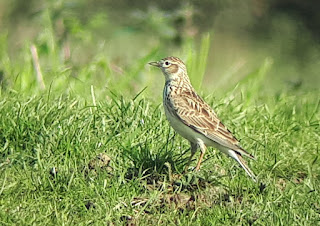 Skylark, Ellerton Landing. I don't think I've ever before managed a pic of one of these beautiful songsters who's effervescent songs have been the soundtrack to the weekend.

Today, I was up and out by 06.15, having emptied the moth trap of these two beauts: 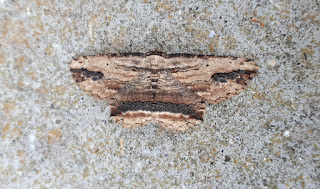 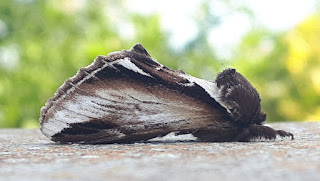 Both new for the garden I think.

I did my usual LDV circuit, bumping into Adam F at the Low Grounds. Good birding, but the clear blue skies meant by 10.30 it was getting hot and clearly nothing was moving. Well, so I thought! I decided to head home.

No sooner I had arrived home, than I checked Twitter to find to my disbelief, a photo of a Sandwich Tern at Wheldrake Ings!!! Panic stations!!! And then I calmed down, realising this photo had probably been taken hours ago and the tern would be long gone. After all, they never linger in the York area, which is why they are so very hard to see and why they have not made it on to my York list. So, to the shower, followed by a slice of toast and a cuppa. However, when finder of the bird Ed Tooth messaged me to say the bird was still there 25 minutes ago, I put down my tea, grabbed my bins and shot back out of the door! All brownie points received from being home early, quickly evaporated as I retraced my journey back along the A64....

I prepared myself for a dip, although attempting to see it and failing, felt much less excruciating than not trying and the bird still being there! We were due at some friends for a BBQ this afternoon, so I needed to crack on....very soon I was piling down the familiar lane to the Ings car park. I bumped into a birder in the car park - Ed Tooth! - who told me there was a chance it would be visible from Tower Hide, if it hadn't flown off. I thanked him for his help and ran off. Despite my sandals, telescope, bins and the scorching midday heat enveloping me like an electric blanket, I managed to run virtually all the way to Tower Hide without dying; I knew all that training would come in handy one day (although to be fair, I don't tend to train with a full set of optics swinging round my neck, or in sandals). I leapt up the steps to the top floor and to my surprise the hide was empty. I got my scope set up. My phone rang, Craig, who to my delight said it was still here and that I should see it from Tower. But where was it?! I could see two Common Terns flying around, but no big white Sarnie. Nerves! Stress!

Craig rang again to say it had dropped on to a post by the 'Cormorant trees'. There! just a glimpse of Sandwich Tern-white through the bright green leaves of a Willow bush. Not the best of views, but this was my first York Sandwich Tern - Kaboom!!! Cue massive adrenalin rush! I sprinted back out of the hide and further down the track. Setting up my scope, and there it was, in all it's glory. An absolute monster tern, complete with yellow-tipped black beak and punk-tastic crest! 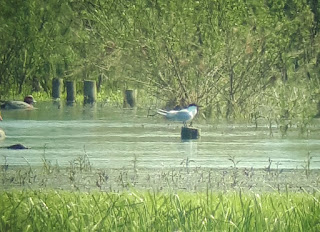 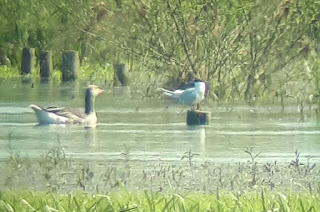 This was the last thing I had expected on a glorious blue-sky day. Why was it here? with a bit of height it could probably see the sea shimmering to the east, or at least the Humber. Even the local geese thought it was a bit out of place and swam over for a closer look. It was flushed shortly, and gave a lovely fly past, with big black wedges on lovely white wings. It dropped on to a post again in the middle of the marsh. Corking! Craig rolled up in his landy, I was proper gushing! He kindly gave me a lift back to the bridge which meant I was back home in less than an hour. Classic local twitching scenes!
...
I tried to explain all this at the BBQ this afternoon. My friends seemed pleased for me, but I suspect they probably thought I was a bit mad. But I think they already thought that!