As is typical, the best birds tend to turn up when I am otherwise disposed, usually on Dad duties. As was the case this last weekend, when we had headed south to Hertfordshire to deposit the newly D-mob happy kids with their inlaws for the first few days of the summer holidays, only for me to get news of a spanking adult summer Franklin's Gull at Scaling Dam near Whitby! Doh! I couldn't be further away. And of course, the gull showed off all afternoon, strutting around in front of the hide- and what a corker it appeared from the photos I saw on Twitter! It flew off north early evening and was not seen again.

So, back in York, childless for a few days, the world was our oyster. With oysters in mind, I decided to do the honourable thing and offered to take my wife out for dinner - a rare treat these days. Arriving home from work, I began checking my phone for some good places to eat. This was when I noticed a message that the Franklin's was back! No way! A change of plan was in the offing!

Vicky arrived back and I asked if she fancied eating in Whitby that evening. Whilst this was a bit of a bonkers suggestion, she thought this was a nice idea as we could take the dog for a walk on the beach afterwards. She knew I had an ulterior motive of course and soon we were legging it east then north - destination: Scaling Dam. Almost as rare as the Franklin's Gull, at least recently, it started to rain! We haven't seen rain round here for weeks and weeks in what is one of the longest, hottest dry spells I can remember. Fortunately, the windscreen wipers still worked and I remembered which button to press to turn them on... Back to the chase, the traffic was reasonably kind, and after just over an hour, we arrived at Scaling Dam, with Vicky only feeling marginally car sick, after my anxious driving.

We had had news of the bird's presence only ten minutes before, so with mounting tension I grabbed my gear and pegged it down to the hide. 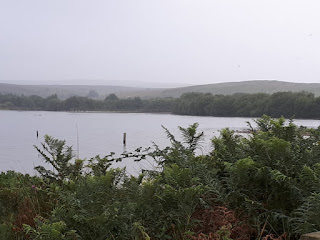 The murky view across the reservoir.

The small gang of gathered birders gave me the great news that the gull was still present, albeit distant and hidden behind a Common Gull. A kind chap called Gordon let me look through his scope so I could work out which particular Common Gull it was sitting behind. Thanks Gordon! Shortly, a black head with large white eye crescents, leant forward - there you are, you little cracker! But it turned out that actually, this bird was quite the show-off, and soon decided to go walk about, strutting among the other gulls, whilst the rain poured down. 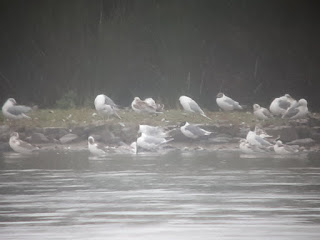 Not bad views to be honest, despite the distance and the rain, and a better-looking bird than the last British Franklin's I saw at Thamesmead, Essex, back in April 2000 (Wow, 18 years ago!): 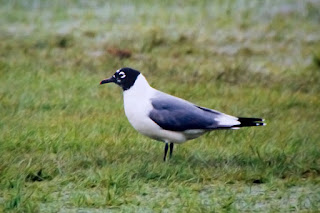 Most birders seemed content with their views and as the rain eased, they departed, leaving me and Gordon watching. Suddenly, the bird took flight and flew straight towards us across the water. We begged it to land, and to our delight, it pitched in on to the island just in front of us - what a stonking bird! It gave us superb views, sitting casually on the edge of the water, having the odd drink. 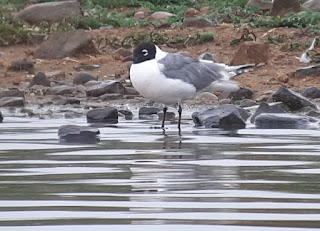 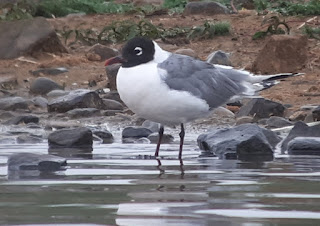 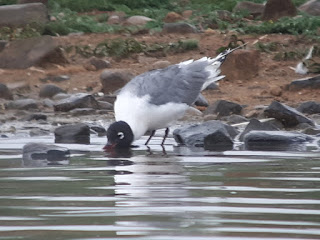 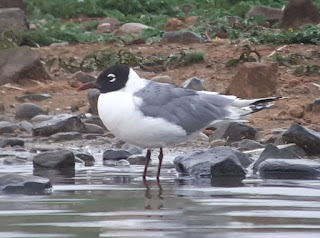 My first Franklin's Gull in Yorkshire - get on my list you little belter!

After about five minutes, at 7.49pm, the gull got up and flew right past us, and off north over the houses alongside the road. Cracking. There is a big farm up that way, and I wonder if it is feeding in fields near there?

We then headed down to Whitby, had a super curry in the 'Passage to India', before taking Lunar down to Sandsend beach for a dusk walk. And on the way home, 'Frankly, Mr Shankly' by The Smiths came on the radio. You could not make this up!