The southwesterly wind was up and waders were on the move, so with a couple of hours to spare, I headed to Hes East to see what might have dropped in. In spite of the long dry spell, the water had not dropped much, and only a thin shingle and mud drawdown was in evidence. Nevertheless, two Dunlin and a Common Sandpiper had dropped in. A good gang of c50 Aythyas were mainly Tufted, but five Pochard were present. 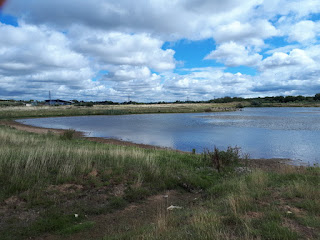 The east end of Hes East 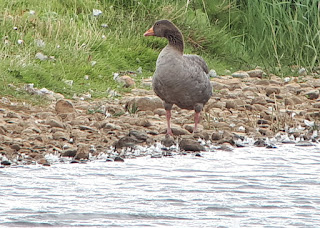 A fine Greylag Goose...look closely, there are two Dunlin on the lake shore!

An abrupt 'Too-lee' got me frantically scanning -surely a Ringed Plover! And there, a fast-flying fivesome, heading straight down the lake. They got as far as the Sand Martin bank, then went up at 45 degrees, over the trees and away. Class migration in action. Where was the accompanying Sanderling? Not to be today, but a quintet of Ringos was a great autumn record for the York area. Clearly, waders were on the move. Duncan messaged to say a Ruff was on the Pool at Wheldrake, a new bird too, but sadly nothing else. I stayed for an hour scanning with ears and eyes, but sadly nothing else happened, save a few Swifts overhead and a couple of Yellow Wagtails.

After tea, headed down to the Pool, which is continuing to dry up - see below. 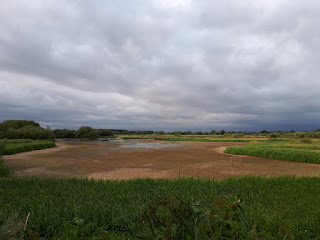 The Wheldrake Ings Pool, with water rapidly receding into the distance.

Nevertheless, it was alive with birds. 23 Snipe were busy probing the remaining wet, around the feet of stationary Grey Herons. Nearby the juvenile Ruff was feeding with the lingering juvenile Icelandic Black-tailed Godwit. No less than ten Green Sandpipers were present, one of which, a juvenile, was very noisy, calling continually the entire time I was there. So, 35 waders of four species. A wader fest, albeit a moderate one!

A fine adult male Marsh Harrier enlivened proceedings briefly. I went round to Swantail (the hide is now in the process of being removed) and added two Shovelers to the list. No sign of the Whinchat I saw yesterday or the Water Rails. 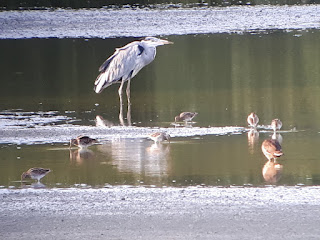 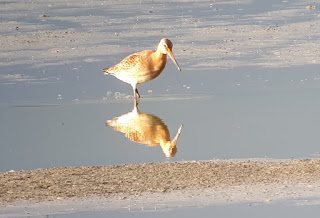 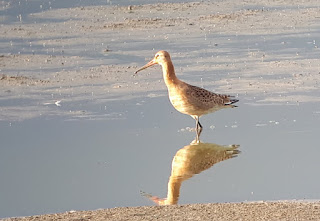 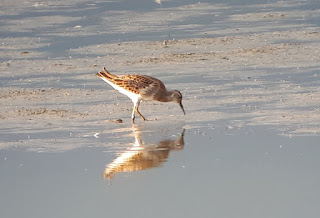 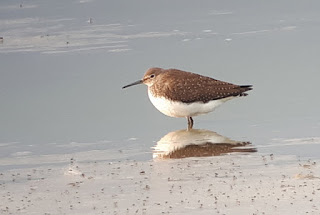 Green Sandpiper. Juveniles are starting to arrive now, in very dapper plumage, among the moulting adults.

c100 Swallows and a few House Martins were feeding over the riverside, pre-roost.