In a fortnight, it will be thirty years since I saw the Golden-winged Warbler in Kent. Thirty years! Is it really that long? In all that time, there has not been another sighting of this stunning bird in the UK.

The event is the biggest twitch I have been on in terms of numbers of birders present, and possibly won't be surpassed. The bird was found by Paul Doherty, who is on the York Birding committee, so I have been fortunate to hear the story of this wondrous bird's discovery direct from Paul over a pint.  You can read it in BB here.
...

Back in those days, I got hold of bird news via the Birdline service which you could ring and hear a recorded message of the latest sightings from around the country. My Mum always used to go mad if she caught me ringing it, as it was a premium rate number and cost a fortune! One evening, I sneakily rang Birdline and was quite stunned to hear that a Golden-winged Warbler was present in Maidstone, Kent. I had no idea what a GWW was, but for that reason knew it must be dead rare, and I knew that Kent was the other end of the country. I didn't even know which part of the world it was from! I eventually found it in my old National Geographic Birds of North America book. This happened to me again a few years later, when the Mugimaki Flycatcher was reported from Stone Creek, near Hull, but that's another story...

As luck would have it, some birding friends from York offered me a lift down to see it the following Sunday, a kindness for which I am forever in their debt. 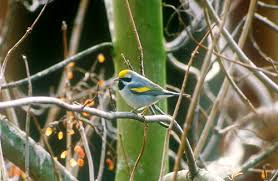 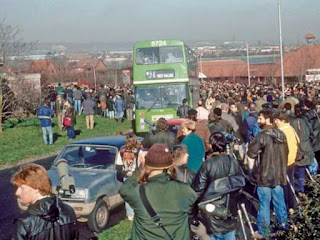 The twitch. The sleepy suburb never knew what hit them! The story goes that some birders boarded the double-decker bus so they could see over the wall into the gardens where the bird was - class! We didn't need to bother - see below...


Reading back on my notes from that day all these years later and I can still recall the day really well. I think it is funny now after only a couple of hours we decided to go for a wander elsewhere - what were we thinking?! As it turned out, we saw the bird, my first American vagrant in the UK, so it worked out well, but it would have been a long ride home if we'd dipped!

“I was picked up by Barry Thomas, Joanne Thomas and Harry Hulse in Bishopthorpe at 4.40am. Barry had a big BMW - it felt very posh. It was certainly very comfy, I had a sleep! We arrived 238 miles later in Maidstone, Kent at 8.15.

We waited at the top left corner of the Larkfield Tesco car park for two hours. Never saw it. Saw Siskin, Redpoll, Blue Tit, Bullfinch etc. c10am we walked off to a nearby nature reserve on the other side of the road to look for a reported Great Grey Shrike. On the way we saw a Waxwing. The reserve was quite big with overgrown gravel pits and surrounded by Hawthorn, Willow and Alder. Saw Gadwall, Tufted Duck, Mute Swan, Great Crested Grebe and Chiffchaff, along with Bullfinch, Fieldfare, Long-tailed Tit and others. Went back to the car park about 10.45.

A large number of birders were standing in different parts of the car park (about 500 people) when suddenly somebody said they’d seen it in some part of the estate. We burned up the steps and ran about ¼ mile in to the housing estate. Nobody knew where to go, but just followed everybody else. After about an hour it hadn’t reappeared and the crowd more or less started dispersing. Suddenly somebody else had seen something which could have been it fly into some gardens. Again we ran but this time about 1/3 mile. After about half an hour we or no one else for that matter had seen it. We wandered back to the car for it was around midday and time for our packups (lunch).

While sitting in the car some foreign twitchers (Dutch I think) came down the steps looking happy and punching the air. Joanne and I got out and asked them if they’d seen it. We ran and were followed by Barry and Harry and got to a bank where everyone was standing. On the other side of the road was a walled garden with a large clematis or ivy type plant where it had been seen. After a moment, it hopped up into a small bare Silver Birch and sat on a branch. It sat for about 30 seconds looking towards us. Everybody cheered! Then it turned around and faced the other way. Then it turned again and flew over our heads. When it was in the tree, it was out in the open - it was a beautiful bird.

It was quickly located in another garden just below the level of the fence-top. It hopped on to a wall and then on to a fence and then flew into some ivy on the side wall of a house. Then it flew off. The whole viewing time was a couple of minutes.

Then we went to Stodmarsh nature reserve. We spent from 2pm until 4.15pm there. After a bit, the Glossy Ibis was spotted high up. It was scoped easily. It rapidly spiraled down and into its roosting place, never to be seen again, at least until tomorrow. Two lifers in a day, can’t be bad. Chiffchaff, Hen Harrier and Waxwing can’t be bad either.” 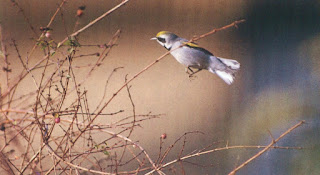 Thanks to the photographers, for the pics in this post, which I have borrowed off the internet. The top one is by David Cottridge I think.