Three kilometres into a very windy York Park Run and my mobile rang. I couldn't answer but glanced at the screen to see Tony Martin's name. This could only mean one thing: big bird news! I diverted off the running track, leapt over a fence and sprinted for my car. Not really, but had I have known what the bird was, I might have done that!

This spurred me on to the finish and as soon as I could get my breath back I listened to Tony's message: "Swift with a white rump at Hornsea - either Pacific or White-rumped!" Holy crap, batman! Now I have a little bit of painful history concerning swifts with white rumps at Hornsea Mere - see here - as back in October, I narrowly missed Britain's first ever White-rumped Swift at the very same spot through simple bad luck and timing (or being too lazy). Sweating profusely and shattered from the run, I realised I had to go for this bird and as I dashed upstairs for a post-run shower, Rich Baines rang confirming the news, and the twitch was on!

Picking up Rich on the outskirts of York, we sped east, assisted by the strong westerly and were heartened by news from Tony that the bird was still present from Kirkholme Point and had been identified as a Pacific Swift. We were both delighted with this news as Rich had seen the WRS last October and like me, hadn't seen PS in the UK.

Our nerves jangled and stress elevated as the sparkling waters of the mere were glimpsed through the roadside trees as we approached Hornsea. We speculated as to whether the bird would still be present. Such a mobile species could be miles away by the time we arrived. Perhaps the bad weather would hold it?

Arriving at the Mere, I threw the car along the potholed entrance track and into the car park. A gang of about 20 birders were braced into the keen wind at the end of the point and we rushed to join them. Drat! No sign of the swift for the last 20 minutes. The air above and in the lee of Swan Island was swarming with House Martins, Swallows and the scything forms of Swifts. The gusting wind was going to be frustrating, but Rich and me found a sheltered spot comparatively out of the wind and started to scan. This felt like it was going to be difficult...Tony and Dob were there and spurred us on, saying the bird stood out, being rakish thin with a long tail and obvious white rump. It had to be there somewhere! 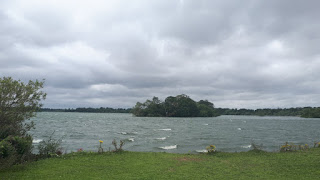 Hornsea Mere in the storm. I first picked up the Pacific Swift to the left of the central island (Swan Island).

Over the Mere, which looked like the North Sea, complete with white capped waves, Little Gulls and Common Terns zipped about, amid a multitude of hirundines and a few Swifts. Birders around us were getting frustrated. Some had seen it earlier, others arriving later like us, had not. As is sometimes a strange phenomenon at twitches, some birders simply stopped looking, too daunted by the task at hand perhaps, or through sheer frustration. Nevertheless, with every birder not scrutinising the flock, there is one less pair of eyes to latch on to our target. One nearby birder said he was waiting for somebody to find it...Try yourself mate!!

More birders arrived. The 'not seen for ten minutes' soon turned into 'not for half an hour mate', and then suddenly there it was, in my scope, cruising over the distant trees, white rump blinking clearly. Sure enough it was a slender, rakish swift with an attenuated rear end, exactly as Tony had described it -really quite distinctive in actual fact. I called out that I'd got it and (apparently calmly according to Rich, though I didn't feel very calm at the time!) explained its movements allowing most of the gathered throng to get on the bird. Fantastic! I moved aside and let Rich get on the swift through my scope, cue big grins, hugs and high fives all round. What a great feeling to nail this absolute belting rarity!

The Pacific Swift cruised around for the next 15 minutes or so, sometimes disappearing behind the trees only to reappear after a minute or two. Most people present managed to get views and a couple of super sharp shooters managed some long range pics with their DSLRs - amazing skills! 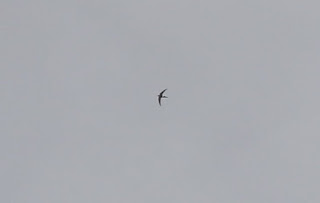 
As about 12.10pm, I last saw the swift over Swan Island. It dipped down behind the trees and by 12.30pm I hadn't seen it again. I don't think anybody saw it after this time until it was refound miles away over Easington Church shortly before dusk. We were indeed very lucky and this helped ease the pain of missing the White-rumped Swift back in October. 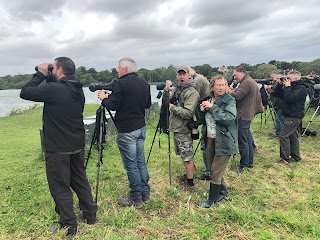 Very happy Birding Dad. Thanks to Rich for the pic.

The last time I saw a Pacific Swift was following an operation in Cairns Hospital (Australia) back in 2017, so the bird brought some interesting memories back! Oh, and the Park Run. Not bad, 21 minutes 35, my third best time for a 5km.