Dow-twitchers and the Egret Hat-trick

Hosting Philip for the weekend, we decided to head for Fairburn Ings, where we knew the kids would have a great time and we would enjoy some good birding. A Long-billed Dowitcher had been discovered first thing which added to the allure.

A little later and we found ourselves heading up the track towards the coal stacks where the bird had been seen, stopping to admire Alder Beetles munching Alder leaves. This is a leaf beetle that has only recolonised Yorkshire and, indeed, the UK in the last decade or so. It is a smart, shiny blue dude, but totally mullers the Alder leaves. Nice. 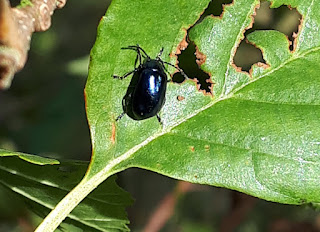 Up at South Lagoon, we discovered a gang of about 30 birders looking for the dowitcher, which hadn't been seen since it flew about 8am. The gen was that it hadn't gone far, just out of sight. This is the first Fairburn record since 1981, so there was palpable tension in the air from the assembled crowd many of whom had been there for a couple of hours. After a bit, the kids were getting restless and Philip and me reckoned it had moved somewhere else - or at least, it was worth checking to see if it had. We headed round to the west side so we could look down on to Spoonbill Flash. If nothing else, perhaps the Cattle Egret would be showing. The first white bird I picked up - besides the ubiquitous Little Egrets, was an elegant Great Egret, stalking about, snake-necked in New Flash. At one point as I phonescoped, it trod in an unseen underwater hole, leading to a bit of a comical dance.

Great Egret falls in a hole

After watching the egret for a bit, I got into character, searching the muddy edges of Spoonbill Flash. 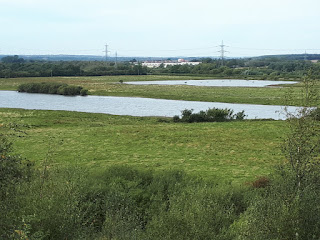 Spoonbill Flash with New Flash in the distance.


To my surprise and delight, the first wader I picked up through the scope was the Long-billed Dowitcher. Philip didn't believe me until he looked through the scope! I guess sometimes it just pays to go and look elsewhere when a rarity isn't showing in the original spot.

I rang Mike who was among the crowd at South Lagoon and asked him to let everybody know. Ten minutes later and they all rocked up, seemingly very pleased it had been refound. Sol had a look through the scope. I then offered Addie a look, but Sol said "don't bother it's boring." Standard.

Long-billed Dowitcher getting it's freak on


We moved on round the coal stacks and after a bit we picked up the Cattle Egret to complete the egret hat-trick, the first time I have done that in Yorkshire. It was quite flighty and landed out of sight on the Moat, so I didn't manage a pic. Presumably the same adult I saw here on virtually the same date last year - see here - which was also the last time I saw a Long-billed Dowitcher. Weird coincidence!

Also noted were a couple of Green Woodpeckers again, one we missed on the Yorkshire Big Day.
at September 15, 2019