An American in Yorkshire

Red-eyed Vireo is one of the more regular American landbirds to rock up in Britain (144 accepted records to date), but it is also one of the coolest, like a giant Firecrest. Even it's name sounds cool: Red-eyed Vireo. Class. I have been lucky enough to see two in Britain, both back in 1995 on St Mary's, Isles of Scilly. 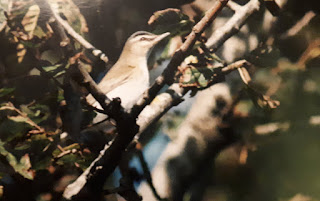 Red-eyed Vireo, St Mary's, Isles of Scilly, October 1995. Not sure who took the photo, but not me!

Described by Richard Millington in his classic 'A Twitcher's Diary', as a 'hyperzonky megacrippler', REVs don't look like anything native to our isles. They are absolutely corking, with bright green upperparts contrasting nicely with silky white underparts, and yellow undertail. The head is large and broad, with a blue-grey crown, massive white supercilium offset with neat black edging and a stout, hooked bill. Cool or what? The red eye is only seen on adults, and most of the birds that rock up are juveniles, sporting brown eyes.

It has been a great autumn so far for REVs, with many turning up mainly in Ireland and the southwest of England. Yesterday, to my astonishment, a bird was found on Vicars Lane, Easington, a road already etched into birding history books as the site of the 2016 Siberian Accentor. Typically, when the news broke, I was hundreds of miles away in Buckinghamshire at a family event and had no chance of getting to Easington during daylight. A tense night followed...

As forecast, it was raining before dawn and it got worse as I headed to Hull, and out east towards Easington. Shortly before I arrived, the news I had been hoping for came through, that the REV was still present along Vicars Lane. Fab. About 30 rather soggy looking birders were along the lane and many of them had just seen the vireo. Great. Over the next hour, I saw the bird in flight a couple of times but my anxiety rose as my clothes became drenched. It seemed to be returning to a bush with small black berries on every so often and between times moving along the bigger trees next to the lane. I grilled the trees intently, picking up Pied Flycatcher, Yellow-browed Warbler and Brambling, along with a couple of Blackcaps and Chiffchaffs. Great, but no cigar. I returned to the group gathered near the berry bush and immediately saw a movement - there it was!! - sitting unconcernedly in the middle of the bush casually picking off berries. Class! After watching it for half a minute, I decided to get a record shot for the blog and it annoyingly hopped slightly, so I only managed a pic of it's American rear-end! You can see the lemony undertail, suggesting a juvenile bird, as would be expected. The bird flew off back into the taller trees leaving the small gathering of birders beaming with delight. 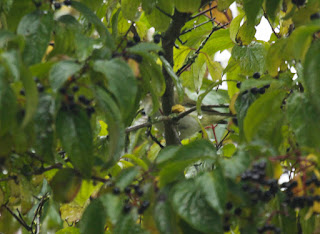 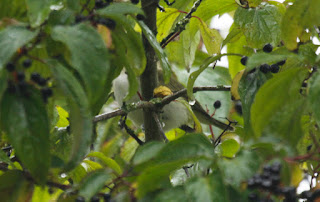 Red-eyed Vireo, Easington 13th October 2019. Honest! This is the second record for Yorkshire, the first being at Kilnsea on 30th September 1990. 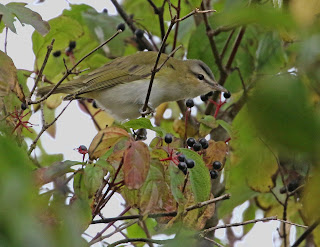 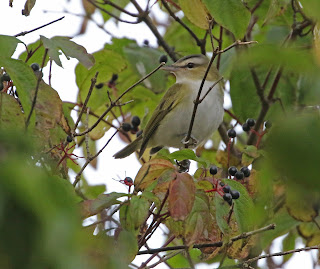 After my American encounter I pondered what to do. Redwings were dropping in out of the sky, which made me think of finding some birds. I hooked up with Tony Martin and Mark Dobson and we walked Spurn Point.

The weather was dreadful and we got soaked. Two or three Ring Ouzels, a probable Yellow-brow, a Peregrine, Marsh Harrier in off the sea and a few common migrants were all we had to show for a long, very wet walk. Fortune favours the brave? Well, sadly not today!

Tony and Mark decided to head home to dry off, so I thought I'd cheer myself up with another look at the vireo. My luck seemed to be in and the bird flew back into the Sycamore above the berry bush a few minutes after I'd arrived and then dropped into the bush. After scoffing a couple of berries, it flicked back across the road and showed well up in the Willows next to the lane for ten minutes or so. Just as a I remembered the Scilly birds, it was quite sluggish when feeding, but would suddenly move quickly, hopping along thick branches and then zipped up into the Sycamore leaves. Hyperzonky megacrippler? Absolutely!

On arriving back in York, I found out a Great Snipe had been found on Beacon Lane. Oh well, we tried! Thankfully I did see Spurn's last GS, the rediculously tame bird, back in 2013.