It dawned lashing down and blowing strongly from the southeast. Not the finest weather for birding, but the wind was in a favourable direction at least and the forecast looked better for the afternoon. Nevertheless, most of York Birding's finest dropped out of the club trip leaving myself, Peter, Neil and Noel to brave the flooded A166 and head east to the Great White Cape of Flamborough Head.

We headed first to the seawatching hide - the weather was so bad, it was raining into the hide! - but we were glad of the excellent shelter, which enabled us to enjoy a blink (short seawatch) during which a couple of hundred Wigeon, c30 Teal, 2 Brents, Velvet Scoter, several Common Scoters and Red-throated Divers went past, plus the incredible sight of Robins, Skylarks and Redwings making landfall after what must have been a truly awful crossing of the North Sea. A Weasel hunted the clifftop, presumably seeking a migrant for breakfast.

Towards 10am, the arrival of more landbirds encouraged us to brave the vile weather and try a walk down to Old Fall. This proved to be really special, with literally hundreds of Redwings feeding in the hedge and in the stubble field, along with dozens of grey Song Thrushes, a couple of Ring Ouzels and a few Blackies. Chiffchaffs and Goldcrests accompanied our walk down the hedge, and grey Robins flicked in and out of the bushes. A fire-tailed Redstart enlivened proceedings, but melted away rapidly. At the plantation, a couple of Yellow-browed Warblers called from the Sycamores but were invisible among the swirling, thrashing branches. A Woodcock exploded from near the pond, shooting off through the trees. 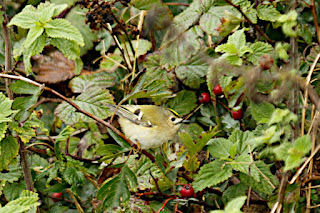 Next up, we headed for South Landing after scoffing a pie generously provided by Noel. Nothing much new here, although two or three Yellow-brows were heard and a Swallow was hawking for insects in the lee of Highcliffe Manor. A Peregrine had a kill in the field near Booted Gully, and was calling in annoyance as it was pestered by the local Carrion Crows. The rain had eased at last and early afternoon we headed for the north side of the head, where a stop in Thornwick Pool Hide revealed a fabulous bouncing Jack Snipe, a single Dunlin and a dozen Teal. We headed round a loop of Thornwick, with plenty of thrushes still coming in, Blackcaps, Chiffchaffs, two more Swallows and a Pied Flycatcher in Holmes Gut.

Jack Snipe getting it's bounce on.

News came through of a Red-breasted Flycatcher at Old Fall, maybe fresh in, or perhaps we just overlooked it in the spectacularly bad conditions earlier! We walked down in the comparatively clement weather and after a short wait, were delighted to see that the RB Fly was a fine male, sporting a lovely peachy throat patch and grey head. The bird performed very well approaching within a few metres low to the ground and giving it's distinctive clicking rattle. It was completely unconcerned by our presence and despite the really gloomy late afternoon light, I got a couple of photos. Whilst watching, a Reed Warbler appeared momentarily, offering a bit of Blyth's-esque banana pose, but it was super gingery, with buffy underparts and just a standard Reed (sadly). Nice to see however, with the Unst Blyth's still fresh in my memory. A few Bramblings wheezed overhead and with the RB Fly still rattling in the Sycamores, we decided to head or home. 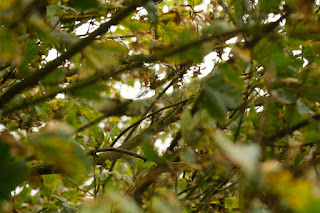 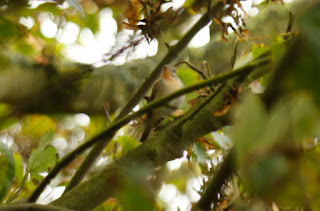 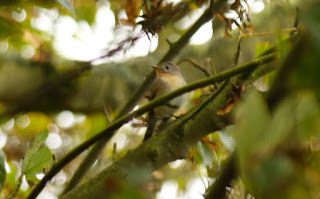 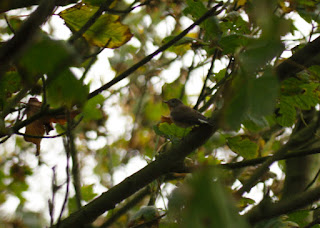 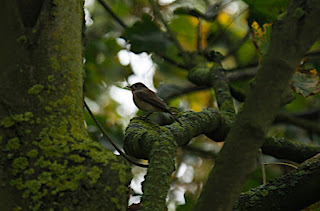