#2? Well, this is my second go with the moth trap this spring, but I didn't post anything about #1. Anyway, after a warm spring day and a cloudy night, I had a good catch, with a number of new species. I haven't really trapped this early in the year before, so I am getting a number of firsts for the garden. #1 had added Twin-spotted Quaker and I found another couple of those among the egg cartons today. Two of today's most exciting were outside the trap- a beautiful Waved Umber perched on the soffit board and The Streamer, an exquisite little dude that shot off into the bushes as soon a I reached for my phone camera. Inside, several Hebrew Characters were upstaged by two beautifully marked Early Thorns, whilst two Early Greys blended in so well with the egg cartons that I almost overlooked them! A quagmire of quakers tested my ID skills, with a couple of lovely, furry Small Quakers and a couple of Twin-spotteds discovered. Small Quaker - check out that fur!
Below, Early Grey. 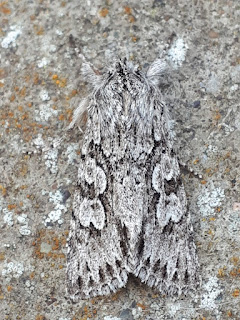 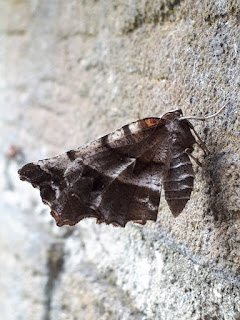 The butterfly like Early Thorn perched on the wall. Very cool! 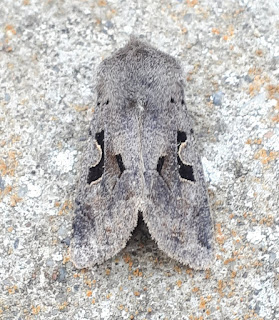 Hebrew Character. Quite cool-looking, with an awesome name!
at April 09, 2020