A week ago, the PM announced a very slight easing of Lockdown restrictions, so driving to a place to take exercise is now permitted. Also, you can take as much exercise as you wish. Nevertheless, I feel the right thing to do is to keep things local still. I visited Wheldrake for the first time on Wednesday evening. It was pretty quiet, though two Whimbrel were a joy to see, presumably among the last of the spring passage. A Cuckoo was calling along the river on the way back, which is always great, especially given their decline.

Today, I rose early, and headed to Strensall Common to check the sheep. All fine, in spite of them being given the run around by two off-the-lead dogs ("sorry, we didn't realise; our dogs won't chase them"). Depressing stuff.

My spirits were lifted by a pair of super-active Spotted Flycatchers nearby. The male was courting the female actively, singing his head off, with his rather weak two note squeak. She seemed quite impressed nevertheless, allowing him to mate with her. These are really special birds now, having disappeared from many former haunts in the York area over the last decade or so. I mostly see them in the uplands or on the coast during migration, so to see them close to home is a real treat. They may not look too flashy, but they have an endearing character of their own and they are complete ninjas when it comes to plucking a passing insect deftly from the air, with an audible snap of the bill! They moved around rapidly through the canopy, never resting for long. I did get a quick chance to take a photo or two, of one of them. 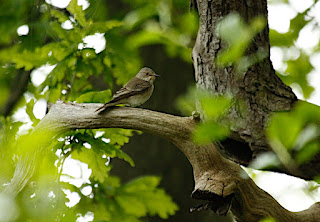 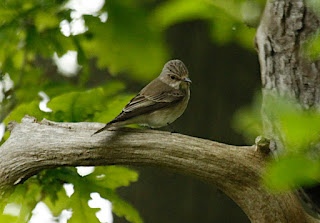