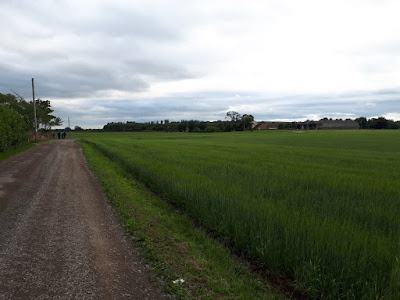 Popped back to Biggin for an hour after work tonight, to check out the Red-footed Falcon. She was performing well, stealing worms from the Blackbirds and diving about around the trees in the farmhouse garden. She always came back to the wires. Great to see Craig again and we chatted about what an interesting experience the whole rare-bird-on-the-local-patch-thing is. He said most people have behaved well during the week and the whole episode has been a really enjoyable experience. Let's hope it continues this weekend! Craig said he'd asked the farmer about when he had first noticed the falcon, and he had said he'd first noticed her on the morning of Thursday 11th June. I did write-up of the bird for the York Birding website - see here. 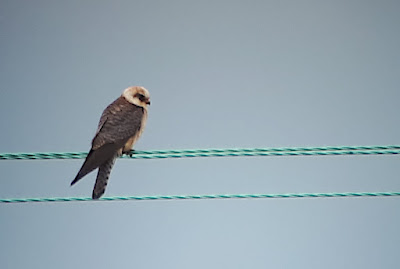 Below, with stolen worm. Kleptoparasitism is not noted in BWP, so this is interesting although they are known to be quite opportunistic feeders.

You can see some retained juvenile central tail feathers and the tertials when she is preening. They are a bit paler and worn - see below: 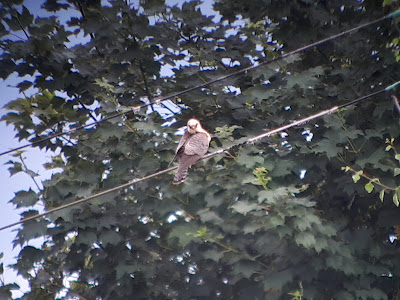 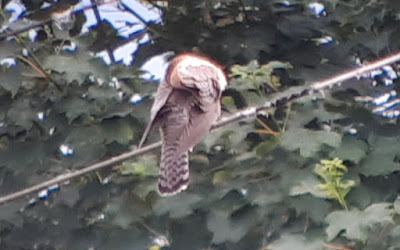 I heard a rumour from my Dad the other day, that Red-foots used to be known as Evening Falcons. I then realised that Falco vespertinus, Red-footed Falcon's scientific name, literally means 'Evening Falcon'...
Post Script: She was last seen the following morning, 20th June. 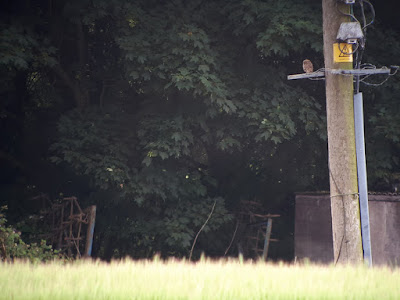 Little Owls were very noisy this evening around the barns. They scowled at the birders and yapped at each other.
at June 19, 2020