Return to the Sea!

It has been a long three months in lockdown due to the Coronavirus pandemic, so it was a great joy to head out to the coast on Saturday. Not so joyous was the 4am start, although I was very excited to be travelling to Flamborough, so I leapt out of bed and an hour later arrived at the sea in mist and pouring rain. Yuk! 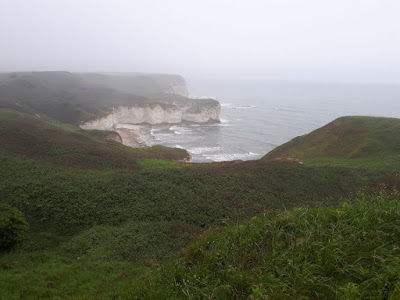 The fog horn was sounding and a light easterly was blowing; it felt like October not June! Not to be daunted, I ventured out from the warm, cosy cocoon of my car and sloshed along the Old Fall path. I really should have packed waterproof trousers, wellies, or both. I was greeted at the plantation with the distinctive song of a Greenish Warbler emanating from the dripping Sycamore canopy. Distinctive though the song is, it is very hard to explain in words, so I recorded a bit with my phone. After a while, I realised the bird was also doing a bit of mimicry of a nearby Wren, which is something I didn't realise this species did. It lacked a Wren's trilling sections, but otherwise was pretty good.
The bird sang continually and as is typical, was super-active, spending a lot of time moving through the Willows and Sycamores on the north edge of the plantation, before zipping through the canopy to the south side. For a while I was convinced there was two birds until I realised it was just this guy bombing around. 12 Siskins were notable, along with singing Chiffchaff and Blackcap. I spent a good hour and a half with this bird, despite the deluge of rain, soaking the song and jizz of this little bird up into my memory. Definitely a cuter-looking bird than the large-headed angry-looking Arctic Warbler, with smaller, spiky bill and rounded head. It was difficult to discern the supercilium meeting over the bill as the bird seemed pretty wet around the head and face, as can be seen in some of the pics below. 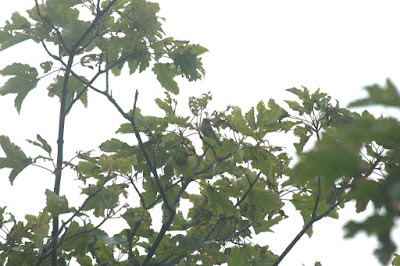 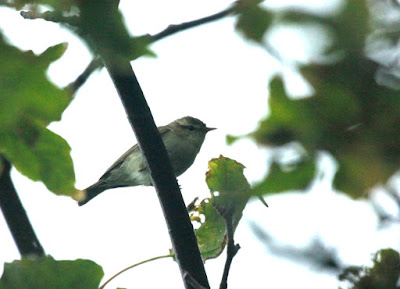 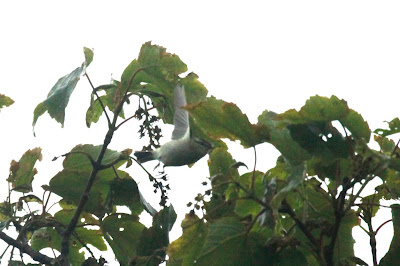 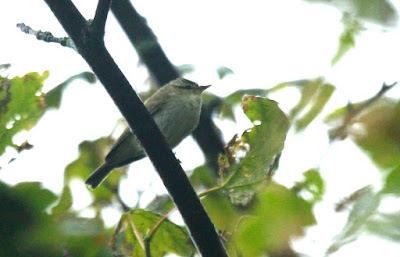 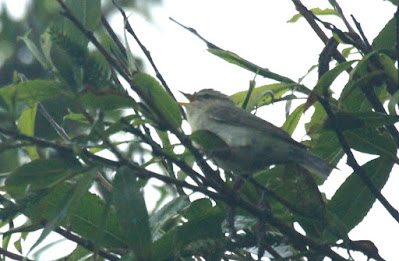 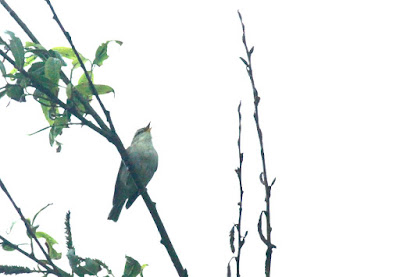 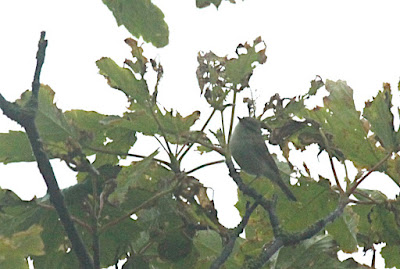 I bumped into Lee J, and together we wandered round the Old Fall loop. Despite the promising weather conditions, we failed to find anything else of interest, although I enjoyed seeing the North Sea through the mist, and the streams of auks and Kittiwakes coming out of Bridlington Bay. I have missed the sea.
Next up, Filey, where news that Dan Lombard had found a singing Blyth's Reed Warbler got my twitching juices flowing. Abandoning my plans to stomp round the north side of the headland, I jumped in the car and sped off. Half an hour later and I pulled up at the top of Carr Naze where I immediately heard the noise of the Blyth's pouring forth from the Top Scrub. A smart find by Dan Lombard, I have been trying to find one of these skulkers in the LDV in the last few weeks without success, so felt it would be good to alert my ears to their voice, just in case I come across one in the next few weeks.
In 90 minutes, I saw the bird twice; once in the base of a large Sycamore, where it hopped among the leaves, demonstrating it's cocked tail and short-winged jizz and then briefly atop a Hawthorn for about five seconds. Neither view would have been tickable, but it waa the song I had come for, and that was really cool. He sang off and on the whole time I was there, a much slower paced effort compared to the frenetic frothing of the Marsh Warbler, but included plenty of mimicry like that species. Terrier Mark aptly described this as a medium-pacer compared to the fast-bowling Marsh! Bouts of Blue Tit, Phyllosc-'hweet'ing, Bee-eater and even Green Sandpiper would be interspersed by series of tecking calls, a bit of Reed Warbler-esque chuntering and some neat little whistled arpeggios.
Blyth's Reed Warbler plus Woodpigeon and Chaffinch. The BRW does a fine Great Tit impression.
at June 15, 2020