Break in the cricket to twitch Cattle Egret

Put the cricket bat down for a quick twitch to Wheldrake Ings to see my first York-area Cattle Egret that had been found by Craig and Duncan on the Low Grounds early evening. Sol came with me and was chuffed to get a ride in Craig's truck! After watching the bird, seemingly a juvenile, for a bit, something flushed the bird and the accompanying Greylags and it flew out of sight. It was last seen heading towards Bank Island and was not seen again by dusk, though I was home playing cricket in the street by then. 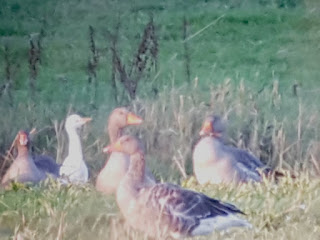