Just before my Dad turned up for his birthday cake and a cuppa yesterday afternoon, I saw that Ollie Metcalfe had struck York birding gold at North Duffield Carrs: an adult Franklin's Gull! Mega! There has been a Franklin's kicking about in West Yorkshire this autumn, so I was really hoping it would wander our way, but England is a big place for one small gull, so I didn't hold out much hope. Ollie had pulled it out of the bag, but views were only brief and it had disappeared rapidly. I was itching to get out to look for it, but instead had a lovely late afternoon with my family, sitting socially-distanced round a firepit in the back garden, scoffing cake that the Boy Leadley had baked. My plan was to get a day pass for Sunday, and search every field and bit of water in the LDV to try and relocate the gull. I didn't hold out much hope, in fact I didn't think it would ever be seen again in the York area, but you've got to try!

The alarm went at 6.30am and I blearily peered out of the window. into the darkness, but was relieved to see no rain! Great. Gear on, off to Wheldrake. The lane was starting to flood, but I would definitely be able to get on to the Ings to see what gulls were lingering. I paused to gawp transfixed at the eastern fire lighting the dawn sky. If I didn't see anything, this scene was worth the early start. 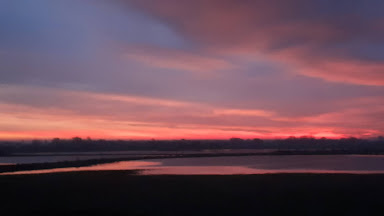 Off down the path I splashed, Tawny Owls hooting unseen in the trees across the Derwent. Tower hide loomed, an edifice silhouetted ominously against the blazing sky. This would be my familiar shelter, so I piled in. There were some gulls still present - great! It was pretty dark really, so it was impossible to sort through them, so I sat and enjoyed the sounds of the wor;d waking up. 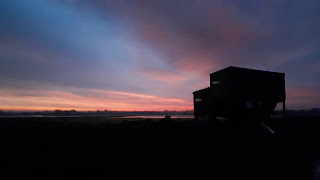 A Marsh Harrier had also woken early and was terrorising the Teal and Lapwings, looking for breakfast. As the scene brightened, a scan revealed no small dark-backed yank among the regular gulls. I decided it wasn't worth waiting at Wheldrake; there was a lot of valley to check and this Franklin's Gull wasn't going to find itself. 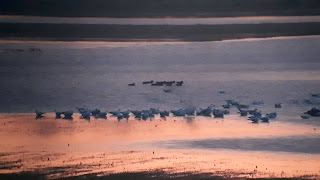 Ollie had said there were a lot of gulls feeding in fields between Riccall and Skipwith so I thought I'd work south down the valley to there and then on to North Duffield. If this didn't work, perhaps it would come into roost at Wheldrake later on. Duncan Bye arrived just as I was leaving - he said he'd stake out Wheldrake.

Thorganby was next, so I parked up in the village hall car park and walked to the viewing platform. There was a fair bit of water on the ings and I could see plenty of gulls on the near flood and over towards Ellerton. I set up the scope and scanned the nearest birds. Nothing. A Little Owl called to the north. Nice. 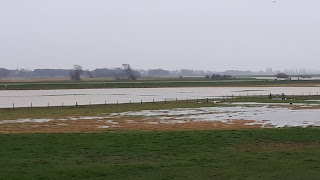 I scanned over towards Ellerton - there were a lot of gulls over there but really too far to do anything with. The nearest gulls took flight, so I scanned back through them. A glimpse of dark slate and a subliminal flash of contrasty black and white wingtips hit me in the face like a shovel, but then was gone. Was that it, surely!- but where was it - was it just a dark Common Gull and my eager mind tricking me?

The flock settled; I scanned back through, nothing, nothing, more birds on the grass, nothing - and then Kapow! There! A black head, white forehead and black beak behind a metal field gate; the bird turned revealing those dark slate upperparts and big white scaps and tertial crescents - There you are, you little belter!! I couldn't believe it, the Franklin's Gull, right here.

I phoned Duncan, no answer! Then the flock flew and landed on the water. Grabbed a photo, then bunged out the news. Duncan rang me back and headed over. 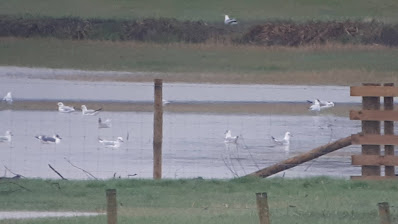 I put the news out and then settled down to enjoy the bird, praying it would not do a bunk before others arrived. On the water it was right out in the open - holy crap! It took off again but flew low towards me and landed on a grassy island where it settled down to a spot of preening, before tucking its head up and having a nap. Great, it looked settled. A long 20 minutes later and Duncan rocker up, closely followed by Tim Jones, Jack Ashton-Booth and Adam Firth - proper York twitch!

The rain came in, driven by a bitter southeasterly straight into our faces and the lenses of our 'scopes and soaking us through. The adrenaline was like a heated blanket, but that began to wear off as the cold and wet seeped in. The gull seemed unimpressed with the weather too, and remained asleep. Probably best. More familiar faces arrived so I decided to head off, to create some room on the platform.

What an absolutely mint bird and the icing on the cake for what has been a great year for York birding.

To cool my jets, I headed down to North Duffield where I unwound watching winter waders wading about on the ings, before heading home for tea and high fives from the kids.

Post script. The rain came down hard in the afternoon, but we tried the roost at Wheldrake. c1000 small gulls came in, but no Franklin's.