It snowed quite heavily mid-morning. The ground was iron-hard following a bitter night and was soon carpeted in soft white. A hush fell over the local birds, as if they were pondering what to do next. I paused midway through undecorating our Christmas tree to gaze in wonder as the flakes drifted down. A little later and out in the suddenly monochrome garden the feeders went crazy. Yesterday's Bullfinch reappeared briefly, but was put off my the melee of over 30 Goldfinches and some rather brash Greenfinches. A Fieldfare dropped in and set about an apple. They only seem to rock up when there is snow on the ground. 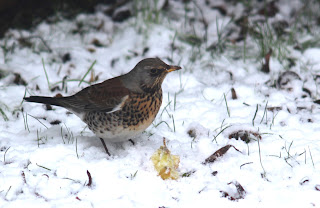 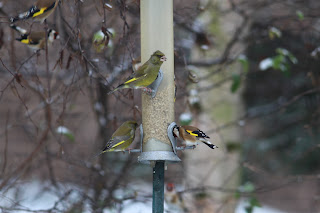 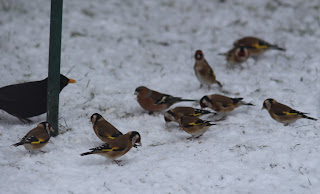 A little later, the lure of loafing gulls dragged me out to the LDV. Sadly, besides a rather forlorn-looking adult Herring Gull, there was no sign of the flock, so I made do with searching the distant Whooper Swan herd on the fields behind Derwent Cottage Farm for the equally lonesome Bewick's Swan. After a while I picked out the slightly smaller, shorter-necked Bewick, complete with cute face and mostly-black bill. I walked a little up the road towards the farm to get a slightly closer view. Minutes later, a truck containing a furious farmer hurtled down the track towards me. I braced myself for the bollocking which I received right on cue. I was told in no uncertain terms to leave. Oops. 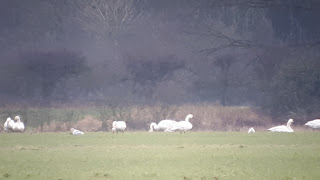 Tail between my legs, I retreated to the safety of North Duffield Carrs and chat with birding mates. A Little Grebe was on the river, not a common bird in the York area in winter. Small numbers of Dunlins picked hopelessly at the frozen floodwater. A thaw won't come soon enough for these guys.

Tomorrow is the annual Mike Clegg Memorial Bird Race. It will be even more memorable this year, as the race is going ahead though on foot or bike only! I am opting for the latter....eek!