Team Birdo set the Cambs Big Day record several years ago, with 135, but this has been beaten a couple of times since, with the current record standing at 137. Having set the Yorkshire Big Day record a couple of years ago, it was about time we had a crack at taking back the Cambs record. Lockdown had reduced reconnaissance, but we were now free to travel, so plans were hastily drawn up, with Duncan Poyser, Mark Hawkes, Ben Green and me ready to bird. 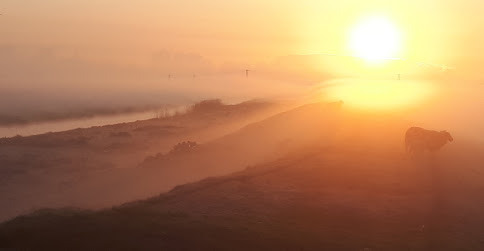 A new route was proposed, starting at midnight and winding our way through the county. A successful attempt would be linked partly to luck and partly to tenacity, but mostly to the weather on the day, and whether those conditions would add a haul of migrants to the 'guaranteed' birds.

We started out just after midnight in the east of the county, dipping our first bird: Stone Curlew, which failed to call to us through the darkness. Not a great start! By 1am, we were checking the dam at Grafham Water for waders, which yielded a Little Ringed Plover and to our astonishment, an Otter! This was the first Otter any of us had seen at this site and was possibly 'bird of the day'!

Onwards we went through the dark, gradually building our list. Woodwalton Fen is a magical place at night or during the daytime, but skirt the line between the two, and it is a sensational place. Long-eared Owls murmured in the last vestiges of night, whilst Woodcock roded, Grasshopper Warblers reeled and Cuckoos, erm, cuckooed.

Arriving on the Nene, a Crane flew out of the dawn and we were entranced by a spectacular sunrise through mist cascading over the floodbank, giving the place the feel of a mountain top in the flatlands of the Fens. 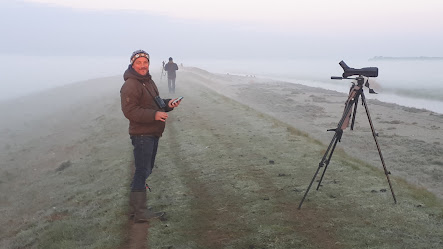 Captain Dunc, with Mark lost in the mist

The mist seriously hampered our wader-finding and the minutes ticked frustratingly away. Once the mist lifted, we added to our mounting tally, but failed to add any bonus birds. Things then went a little awry as a few 'nailed-on' birds had slipped their nails and disappeared. We wasted more time, though reassured ourselves that some of these birds we could well pick up later. With luck. Big day birders usually struggle in the afternoon, as the lack of sleep catches up, but a flurry of good birds - Little Gull, Raven, Hobby, Garganey, Cattle Egret, Wood Sandpiper, Glossy Ibis - gave us an energy injection just at the right time. 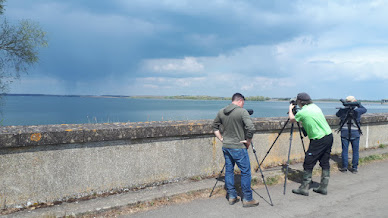 Our second visit to Grafham, at a slightly more sociable hour.

With cold northerlies holding up migrants for weeks, our unexpected additions came from lingering winter birds. We added Goldeneyes, and had several Whooper Swans, following the first we found hiding in the grass at Ouse Fen, shortly after enjoying two drake Garganeys. 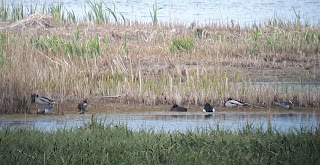 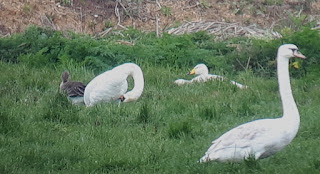 A large flock of over a hundred Fieldfares at Kingfishers Bridge was just about expected given recent records, but a solitary wheezing Brambling was not, and the first I had ever recorded in May. A run of successful sites really boosted our total and we hit the magic 130 mark by teatime, with several more birds still possible and a few hours available. Grey Partridge appeared right on cue, but then things fell apart. We headed to the Ouse Washes without finding Golden Plovers in the fens. We grilled the washes for Pintails, waders, anything to boost our list, but to no avail. Having enjoyed the Otter at Grafham earlier, Dunc's shout of 'Otters!' distracted us from our fruitless search, as we watched four Otters frolicking in the water and out on to the mudbank about 100m away. Absolutely brilliant and a lovely end to our day. Five Otters in a day - can't be bad!

We could have added a couple more birds relatively easily, but realised our quest for the record was at an end - for this year at least - so we retired to Dunc's garden for a socially distanced beer at 9pm.

The birds we should have seen (because they were there) were Pintail, Ring-necked Parakeet, Stone Curlew, Yellow-legged Gull, Mediterranean Gull, Turtle Dove and Marsh Tit. Barnacle Goose was available but we didn't bother. The Golden Plovers seemed to have departed and we heard no Spotted Crakes - they are usually guaranteed. So, with these eight or nine, we could have done it. The following day, I revisited Maxey Gravel Pits and found a Turtle Dove within five minutes. Typical! The day after, Mark saw five additional species at Grafham, four of which were not even present during our Big Day.

But that is the way it goes, and it is the experience that makes the day: great company enjoying great birding in great places. We will beat the record next year! 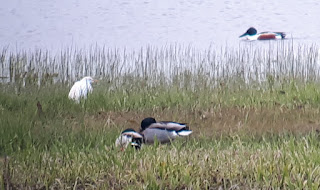 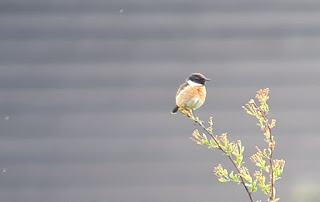 Top: One of two Cattle Egrets we saw (along with countless Little Egrets and c10 Great Egrets), and a male Stonechat, which is a rare breeder in Cambs, so far from guaranteed.