It intrigues me as to whether the long-staying Black-browed Albatross at Bempton is a male or female. Without capturing the bird or retrieving a feather for DNA analysis it is unlikely this could ever be proved, but I was interested to see if the high-quality photos that some birders have taken could provide a clue.

Thanks to some guys on Birdforum, I managed to get hold of the key morphological measurements from this paper. Most of the measurements would not be helpful without capturing the bird, but I was interested in the bill measurements to see if based on a sample of good quality pics, I could analyse the bill to see if that indicated the bird’s sex. 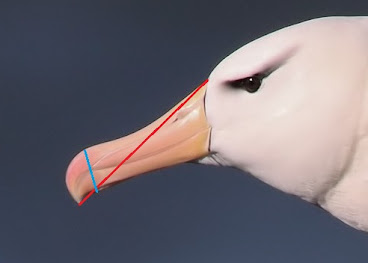 Based on the data in the paper, using the mean bill length divided by mean upper bill depth, you get a figure of 3.96 for males and 4.05 for females. Anything less than 3.96 would be more likely to be male and anything over 4.05 would be more likely to be a female. This should apply to photographs too, no matter what the size as long as the photo was sharp enough to measure accurately and the angle of the bill was as side-on to the photographer as possible.

Having trawled the internet for good quality side-on photos, I found and measured the bill length and upper bill depth in 13 shots that matched the criteria I was looking for. Compared to the mean ratio, I found that five of the pics indicated the bird to be male (measurement ratio of 3.96 or less) and four indicated the bird to be female (measurement ratio of 4.05 or above), with the others were midway between the two.

In conclusion, I think the bird may be female. My reason for that is that providing the bill is horizontal (the process on the underside of the lower mandible is visible) then the only variation will be in length as the bird may be slightly facing away or slightly facing towards the photographer; that would shorten the bill length artificially, meaning that the ratio would favour the male ratio, as you are dividing a smaller number than is real, with a more accurate bill depth, which would lower the ratio. There would be no circumstances in which an inaccurate measurement would favour a female ratio providing the bill is horizontal. Therefore, the fact that four of the measurements look to be equivalent to, or higher than the mean female ratio leads to the conclusion that the bird is more likely to be a female.

I appreciate this is ‘back of the fag packet’ stuff, but thought it would be worth a try! The bird is quite subordinate to the Gannets, hasn’t constructed a nest and does not indulge in much display, although I noted a bit of half-hearted display in the early part of its stay at Bempton. I know nothing of the breeding ecology of this species, but could this behaviour also be significant?

Whether this albatross is male or female it is still a fantastic bird and it has been a real privilege to see this bird so close to home.

Many thanks to the photographers who's photos I measured.