My first chance to get to Flamborough for a while and the conditions looked interesting, with murky skies and some east in the wind. Saturday morning yielded a productive seawatch, with a close Balearic Shearwater, lingering juvenile Long-tailed Skua and Black Tern the highlights, plus a good supporting cast of Sooty Shearwaters, Arctic Terns, Common Scoters, Arctic and Great Skuas. A Wheatear on the roof of the seawatching hide hinted at a bit of passerine migration too. 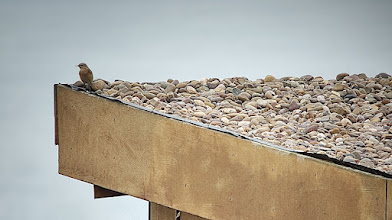 Sunday looked even more promising. Flamborough was pretty foggy to start with, which lasted through until early afternoon and the sea was surprisingly quiet with no skuas at all and one only Sooty Shearwater. Ducks were the main feature, with 115 Common Scoters and 56 Teal eclipsed by a rather smart drake Velvet Scoter:

I tramped round the Old Fall loop and failed to find many migrants, with just a few Willow Warblers, Chiffchaffs and Whitethroats. There were two Pied Flycatchers around, but I missed both and the Greenish Warbler turned up to the north, at Filey, found by Yorkshire Terrier Mark Pearson - nice one mate!

To cheer myself up, I headed over to Bempton to have another look at the Black-browed Albatross which is still hanging out around the cliffs.

The bird was present on arrival, cruising around Staple Newk and attempting to land among the Gannets, which eventually she did. A feisty Gannet pushed her off a little later and she began circling the cliffs, at one point coming to within about 25 metres of where I stood - class.

I headed over to Staple Newk viewpoint and got cracking views as she looped around over the Gannetry below me. After a bit, she got tired of the commotion and glided out to sea, landing about 1km offshore on the edge of the sea fret. She drifted south slowly and disappeared into the fog.