Some days are better than others

Green Warbler, Pectoral Sandpiper and Minke Whales aside, it has been a pretty quiet autumn round here. There has been far fewer birds around than normal, with even common migrants being scarce, which all seems quite sinister. The continual westerly wind probably hasn't helped.

The forecast looked promising mid-week, so after a pretty stressful few weeks at work, I decided to make my long weekend even longer, by taking Wednesday and Thursday off too. Hopefully, a change from the normal wind direction combined with some rain, might just drop a few migrants along the coast.

I was planning to start by seawatching but it looked like the visibility was rubbish, so opted for the bushes. Arriving at the top of Old Fall Hedge, Flamborough, the conditions were grim and I could hear the fog horn; very strong northwesterly winds, low cloud and heavy drizzle blowing horizontally. Wet legs were assured! This wasn't a good time to discover the zip on my coat had broken...

As soon as I set foot out of the car, a Redwing dropped out of the sky and landed on the hedge: my first of the autumn and a great start! I headed down the hedge, with flurries of Redwings blowing over and others erupting out of the hedge in front of me. As I arrived at the plantation, groups of Bramblings wheezed overhead in the murk and a Great Spotted Woodpecker bounded in, seemingly straight off Bridlington Bay. The wind made the plantation very difficult to watch, though I could hear thrushes and Bramblings up in the canopy. I continued the loop. Two Ring Ouzels and a Fieldfare were in the hedge south of the plantation and a tired, wet Wheatear hid behind a thistle clump in the sheep field. 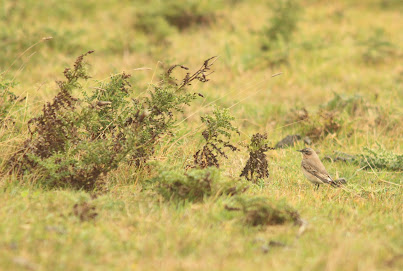 By now, my trousers were pretty wet but the quality of the birding meant I barely noticed. The visibility picked up as the rain eased, and as I arrived at the lighthouse, news came through of a Great Shearwater past the seawatching hide. Time to get my scope and a bit later, I arrived at the busy hide. The sea was impressive, with huge foam-topped waves piling south as the strong wind continued unabated. Good numbers of ducks were passing, although I was really getting the tail-end of things having missed the early morning hiatus. Nevertheless, Wigeon, Shoveler, Common Scoter and a Red-breasted Merganser were all seen. Sooty Shearwaters powered effortlessly north into the wind as if it was a gentle breeze, whilst Bonxies cruised past in the other direction. A shout went up from Brett Richards and I got on a stunning Great Shearwater, gliding past at close range. Strangely, like the first one, this bird was also heading south, so perhaps the same individual that had gone south earlier, which could have gone back north undetected. Either way, always fantastic to see this king of shearwaters off the cape.

By early afternoon, things had died down, so it was time to grab food and head to the northside. Holmes Gut was quiet, with just a few Redwings and a Bullfinch. I walked round the clifftop and down towards the camp. On to the mound and a few Chiffchaffs and a Willow Warbler seemed to be feeding in the shelter of some Holm Oaks and Willows. Shortly, a dry trill announced the arrival of a Red-breasted Flycatcher that zipped past in front of me flashing its white tail sides. 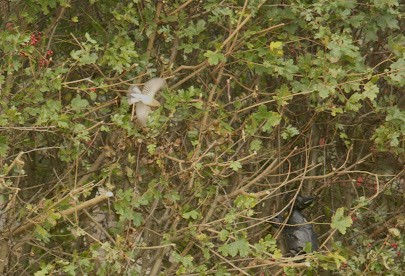 It landed out of sight, but I could still hear it calling, so I rang Andy Malley and Phil Cunningham who I knew to be nearby. They arrived just as the Flycatcher reappeared - good timing! It fed along the bottom of the hedge, before flicking into the garden and out of view. Corking! 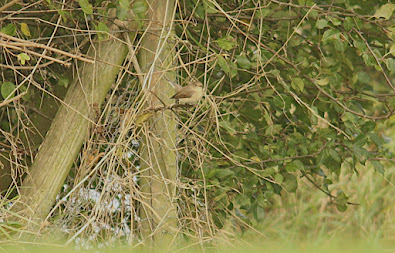 This gave my flagging energy levels a big boost, so I decided to head back to the southside and do the Old Fall loop again. It was quieter now, the thrushes and finches having mostly headed off inland. A Yellow-browed Warbler had been reported in Old Fall, so I hung out with Johnny Mac for a bit, enjoying the late afternoon sunshine and listening for the little Phyllosc. Johnny had seen a Spotted Flycatcher round by the Gorse Field, so after a bit, I decided I would head round. 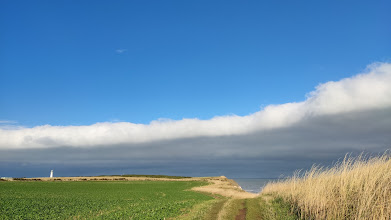 Sure enough, the pale shape of the SpotFly could be seen sitting in the sunshine on the southside of the hedge, occasionally dashing out to catch a fly. I always like the long grass of the lighthouse field, so I headed into it, parallel to the Motorway Hedge. Within a few metres, a small bunting flew out and landed inside the nearest bush. Before I raised my bins, I just knew this was going to be a Little Bunting, as it just had that 'feel'. Through bins, a beady eye peeped out of a neat white eye-ring amid fiery red cheeks, watching me suspiciously. An absolutely belting Little Bunting - get in! I quickly fired off a few shots with the camera, though I was looking into the sun, so I knew it might be fruitless. After drinking it in for a minute, I rang Johnny and then put the news out on the WhatsApp group. I carefully walked round to the otherside of the hedge to get better light, but in doing so lost the bird - doh! I checked my camera and was relieved that you could identify the bird from the image- see below. 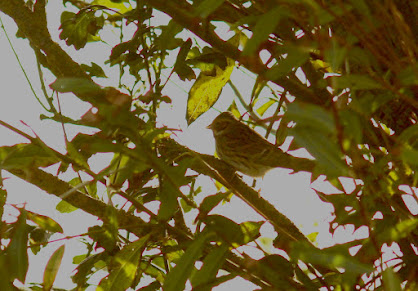 I had to go as I had promised to be back for tea, so after twenty minutes and no further sign, I traipsed off through the grass. I flushed a Common Snipe, which should have been a Jack or a Great, but sadly was neither and another 20 Redwings from the hedge. Nice. I arrived back at the car, weary but happy.  Some days are better than others, and this was one of the best.

A little later Johnny sent me some fantastic pics of the little stunner, which he has kindly let me post here: 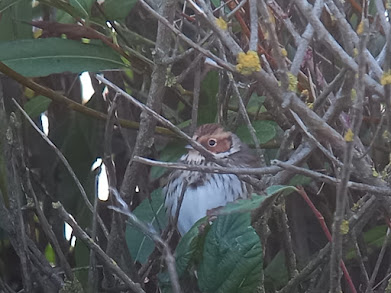