Up early, I caught a train over to Scarborough to help out with the Yorkshire Wildlife Trust AGM. During the day, I met a lot of lovely members and did a guided walk along the seafront south of the Spa, which was very enjoyable. After my walk, I checked my phone and was stunned to see that the Red-breasted Flycatcher that had been reported from Flamborough earlier on, had been reidentified as a Taiga Flycatcher! Yikes! Colleague and top Yorkshire lister, Andy Gibson was also working, so I quickly showed him the message. Fortunately, Andy had a car and was shortly heading back to Hull, so a little detour to Flamborough seemed apt. We piled in and headed south. 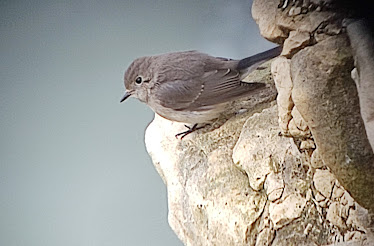 The bird was showing on arrival just down from the seawatching spot below the fog station. About thirty birders were precariously balanced on the clifftop with some further down. It flicked around the chalky clifftop, occasionally dropping on to the grass. Facing away, the deepest jet-black uppertail coverts overlay the dull black tail feathers, a diagnostic feature. It also had an all black bill and no hint of buff in the tertial edges and greater covert bar. 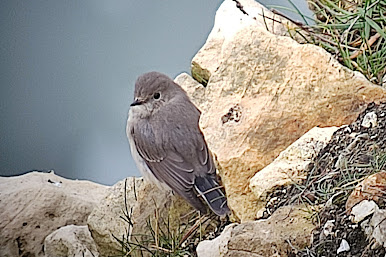 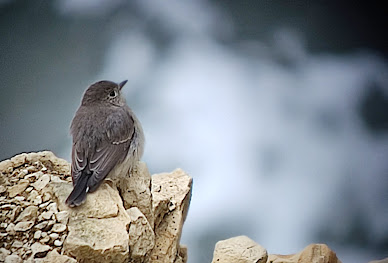 I had seen my first Taiga Flycatcher at Trow Quarry this time last year - see here -and this bird looked identical. In the dull light, it did look decidedly greyish and drab compared with the Red-breasted Fly I saw a week or so ago. Nevertheless, a charming little dude, restless and diving around the cliffs, constantly alert for a passing insect. 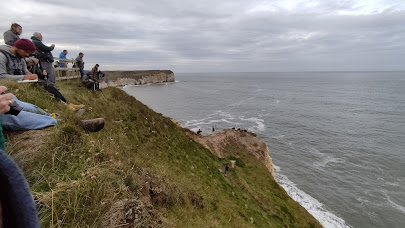 My good fortune continued, as I bumped into York birder, Paz, and he agreed to give me a lift back to the railway station so I could cycle home. We did the Old Fall loop back to his car, which was deathly quiet. And then the news of the Spurn Two-barred Warbler came through....eek!