Up before dawn, I headed for Wheldrake Ings and immediately had second thoughts - it was blanketed in thick fog! No worries, it would be nice to have a wander after a couple of days cooped-up eating and drinking too many Christmas treats!

I was hoping to see the six Smew that Duncan Bye had found yesterday, but I would have to wait until the fog lifted. A Barn Owl flushed out of Tower Hide as I walked past; a nice start. Walking down to the far end, Pintail, Wigeon and Teal could be heard calling, unseen in the murk, whilst a few Curlews and Golden Plovers called among a large roost of Lapwings on the refuge.

I scanned through the ducks I could see from Swantail Hide, but there was no sign of any Smew, but I could only see about 50 metres, so I wasn't too surprised. Shortly, a weird noise drew my attention to the reedbed in front of the hide. It sounded like a 'sneezing' Starling, or at least, the sound that Starlings occasionally make which I have always assumed was a sneeze but may well be just an odd call! Strangely, it repeated this regularly and from within the reedbed. I was a bit puzzled by this, although could not think that it could be anything else. I decided to go outside, where I could hear it better. Outside, the bird was still calling from low in the reeds but I couldn't make anything else of it. It must be 'just' a Starling behaving oddly.

I then noticed a sharp 'tak' from further back. It sounded like a Dusky Warbler! Surely not. But it was, I just knew it. It was calling repeatedly but was too far through the reeds to have a hope of seeing it. I had a quick listen to Xeno Canto on my phone just to check I wasn't going mad. A small dark bird immediately shot straight towards me and into a nearby Willow; a stonkingly-drab Dusky Warbler! Absolutely no way! I quickly switched the video on to see if I could get a sound recording and to my amazement, the little skulker hopped out into the open. Quickly checking my phone, it had recorded the call quite clearly and a bit of the bird - fantastic. I got the news out and did a little dance on the boardwalk.

This was just mind-blowing. We'd all mused about a Dusky turning up in the reedbed here, but never thought it would actually happen! Just then, Stuart Rapson walked round the corner to see me beaming like an idiot and pointing at the reedbed. He'd not heard the news as yet, so was slightly amazed when I told him that there was a Dusky Warbler six feet away. To my relief he heard it straight away and then it showed too - phew! We watched it for a while as it flicked about in the reedbed tacking away, occasionally appearing quite close to us on the boardwalk.

Shortly, Duncan and Adam Firth arrived and I was relieved the bird was still calling frequently as it made it easier to keep track of. It was pretty mobile and headed through the reedbed towards the footbridge. As Jack Ashton-Booth and Chris Gomersall arrived, it moved into the Willows along the path from Pool Hide and then flew across into some bushes on the refuge. It was barely audible and couldn't be seen. Thankfully, after a bit, it flew out calling back towards the footbridge and we all got on it again. Five Goosanders flew over. Nice. It melted back into the reedbed and silence descended.

Several more birders arrived, so still buzzing, I decided to head home for a celebratory mince pie.  Oh, and the weird noise was a Starling; I saw it fly out of the reedbed whilst watching the Dusky.

A full fat first for York, an unexpected end to what has been another good year for local birding here in York. 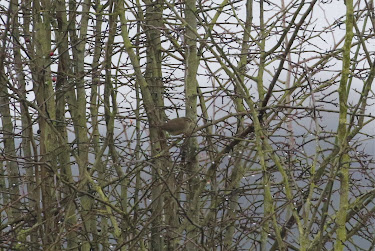 I heard later that the Dusky was showing most of the day, off and on, which was great. Joe Fryer managed to get this pic of it - nice work Joe! Hopefully it will linger longer, allowing other locals who are away for Christmas to catch up with it. Dusky Warbler at Wheldrake. Unbelievable scenes!!