The concentration of birds at Wheldrake Ings is pulling in raptors in search of avian prey, with a smart adult male Peregrine causing havoc among the large flocks of Lapwings and Golden Plovers, while at least three Marsh Harriers continually patrol, looking for a sick or injured victim. This afternoon, an injured Black-headed Gull was plucked from the water a number of times by a persistent Marsh Harrier. The gull had part of it's wing missing, so was an easy target, but it managed to escape every time and eventually the harrier gave up and the gull managed to hide in amongst the gathering roost.

The regular second-winter Mediterranean Gull arrived on schedule and proceeded to play with clumps of weed and sticks as it seems to do most days. It seemed to particularly enjoy this game today in the strong wind. 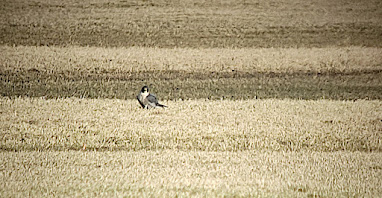 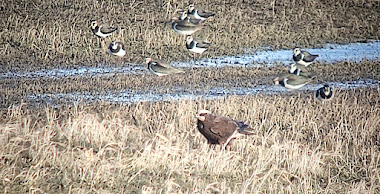 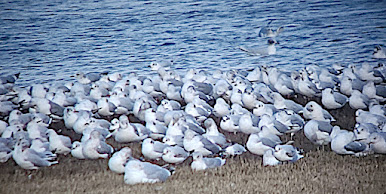 Peregrine (top), Marsh Harrier and Med Gull (on the water at the back).

It felt like spring up in the forest today. My first visit since early summer, I needed to do a reccie ahead of some tours I will be leading in a couple of week. I was greeted by a calm, sunny morning, the air full of birdsong. Song and Mistle Thrushes were singing, along with Marsh and Great Tits, whilst Treecreepers and Nuthatches were vocal as usual. Several Buzzards, including  the usual white birds were much in evidence, enjoying the winter sun although my target, Goshawks, were noticeable by their absence. Several Mandarins and 20 Teals were disturbed from the lake near Hilla Green mid-morning, presumably by walkers.

I had seen two Sparrowhawks before picking up my first Gos, an adult male, indulging in a couple of nonchalant switchbacks high over Langdale End. Back to my favourite spot, the increasing warmth of the sun tempted a large lady Gos out of the depths of the forest. She stiffly flapped over the canopy, tail held tightly shut, with a white snowball puffing out underneath. She landed in the top of a fir half a mile away and called loudly. A striped immature male glided past, taunting the female, he flew big loops around the ridge, before suddenly diving down into the depths of the forest. The female glowered around, surveying her territory and challenging all comers. Checking the ridge behind me, another Gos, an adult male this time was circling slowly over the canopy, lit up by the late morning sunshine. He looked almost white underneath, with a dark hood. Turning my attention back to the female, I took a few pics -  not easy because of the distance- before she dropped off her perch and descended silently into the trees. 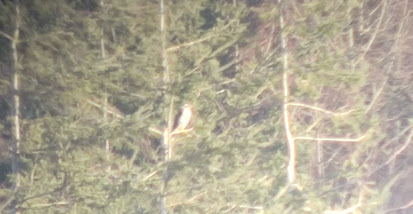