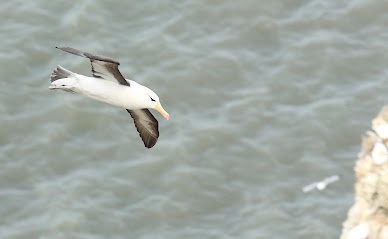 I was pretty stoked to hear that the Black-browed Albatross had turned up again at Bempton Cliffs, though a little sad that she (?) had not found her way back to the southern oceans. News of a second bird in the North Sea filmed from a Danish fishing vessel brought the possibility that she may at least find a friend, if not a mate, if their paths were to cross.

Late Wednesday afternoon I decided to head east to pay homage to this majestic bird. Compared with previous years, she was pretty much the first bird I saw as I lifted my bins to view over the mighty arch of Staple Newk. The thin, impressively-long black wings contrasting with persil-white head and rump, and lovely grey tail stood out a mile from the throng of Gannets wheeling in front of the cliffs. 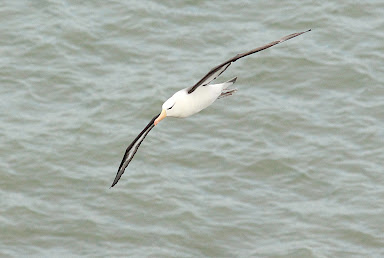 I hurried round to the Staple viewpoint to where only a handful of photographers were standing. To my delight, she was still cruising round, just in front of us, attempting to land on the rocks. She was as stunning as I remember and seeing again brought a lump to my throat. 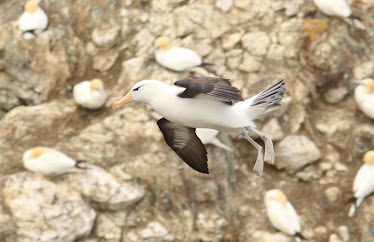 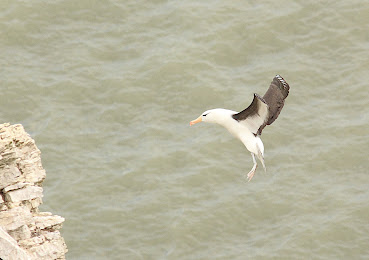 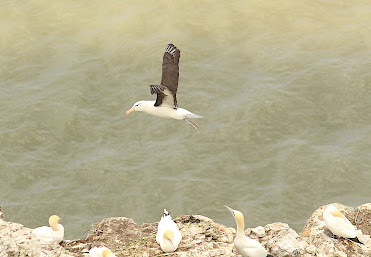 After many attempts and some very close fly-bys, she managed to land amid the courting Gannets. One bemused bird was waving seaweed around and she looked momentarily delighted to be offered such a bouquet. But the Gannet had other ideas and he flew off, leaving her jilted on the rock. 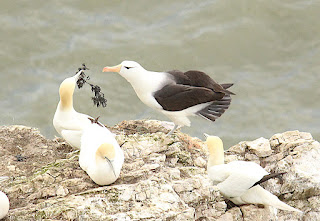 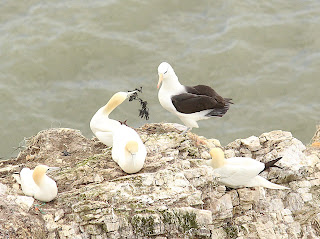 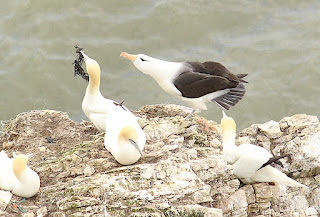 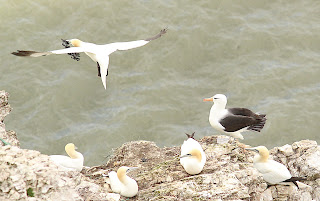 After a bit, she lifted off into the updraught and glided out over the sea and landed on the glassy surface. Within moments a Bonxie arrived and landed a few metres away, its bulk being dwarfed by its elegant acquaintance. Unnerved, the albatross took off and for a few moments, we were treated to the sight of a North Atlantic Bonxie harrying a South Atlantic albatross!

She then flew directly out to sea until I lost her, still heading out. 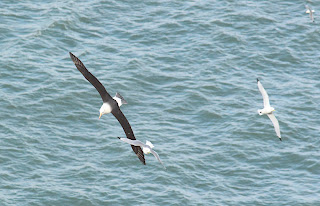 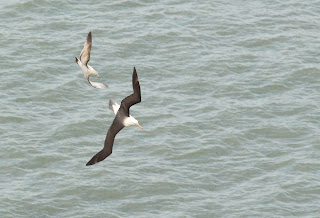 ...and being mobbed by a first-summer Herring Gull