Thankfully, my journey back from Grafham Water directly north up the A1 was like a dream as most 'normal' people were presumably settling down to their Sunday lunch, rather than twitching waders! Bar-tailed Godwit is a bird I had been really keen to see in the York area. Not only is it a stunning bird but it is one of the world's truly astonishing migrants, with birds breeding in the Bering Sea being capable of flying for four days and four nights - non-stop - the full length of the Pacific Ocean to New Zealand. To do this is absolutely incredible and involves doubling their body-weight to provide fuel for their journey and lightening their load by absorbing the organs they don't need for the flight! Along with the Arctic Terns I saw earlier today, they really are the ultimate migrants and I needed to pay homage to this special bird.

Common on the Yorkshire coast, especially around the Humber, they are pretty rare inland and especially in the York area and I have never seen one around here. The bird had been found on a muddy flash near Rufforth earlier today by Mark Lucas. It was presumably a bird that had wintered much further south and was heading across country on its way north to the Arctic tundra, when it encountered last night's low cloud and rain and ditched for a rest and a feed.   A couple of hours later and to my delight, the handsome Barwit was still happily feeding on the flash when I arrived and I spent a good 40 minutes drinking in this awesome voyager. 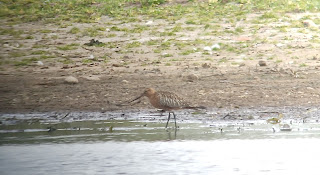