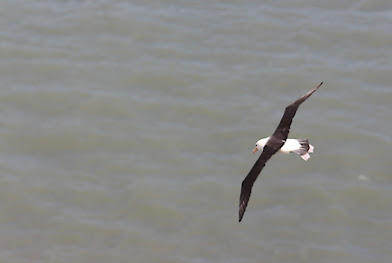 Spent the morning seawatching at Flamborough Head, following a good movement of seabirds the day before. It had largely calmed down, with no Cory's Shearwaters passing, but still good numbers of Manx Shearwaters and best of all, the Black-browed Albatross! I had hoped to see this majestic bird from the fog station but it only put in an appearance rarely, so to combine my rare seawatching trips with one of those infrequent visits seemed unlikely at best. Nevertheless, we watched in awe as the bird cruised around offshore for a few minutes, before heading slowly back towards Bempton. Other birds of note included a couple of pristine juvenile Mediterranean Gulls, a few Arctic Terns and stacks of Sandwich Terns.

A little later, with not much around, I headed over to Bempton and had brief views of the albatross circling over Staple Newk, before it settled on the cliffs out of sight. I strolled further east and could see the bird sitting on the cliffs, albeit distantly.