It had been a good week for birding the Yorkshire coast, with a big fall towards the end of the week grounding large numbers of Scandinavian migrants. So, it was good timing to be heading out for the YOC field trip to Flamborough this morning. Whilst waiting to assemble the troops in the lighthouse car park, we enjoyed a female Redstart on a fence at the back of the gorse field, plus two more on the western edge. A flyover Tree Pipit buzzed overhead, whilst many Meadow Pipits headed determinedly south, along with gangs of Swallows. First up, we looped down the new wild bird crop alongside the motorway hedge. Here, a flurry of warblers, included two Garden Warblers feeding on blackberries, an exquisite Lesser Whitethroat with two Common Whitethroat cousins, lemon-yellow Willow Warblers and a surprising Sedge Warbler.

Looking seaward, a Hobby was spotted sitting atop one of the Fog Station towers. We next checked out the exposed shoreline, where single Knot and Dunlin were with a gathering of Turnstones, with the odd Curlew and Oystercatcher thrown in for good measure. Offshore, several Red-throated Divers, most in summer-plumage, were loafing with Guillemots and feeding Harbour Porpoises. A couple of Manx Shearwaters headed north, along with a lumbering Great Skua. More unexpected was a Gadwall heading south and a couple of Teal.

The Bay Brambles and Golf Course Willows were quiet, though we saw the Hobby again, being mobbed by the local House Martins. It powered off over the rooftops. Two more Redstarts and a Pied Flycatcher showed well in the Golf Course Compound as we headed round to Old Fall. Little of note stirred in the northern Old Fall hedge, though the Hobby gave us a good show catching insects overhead, two Buzzards circled distantly and another Tree Pipit flew over. 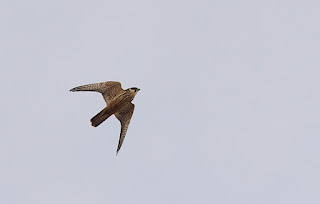 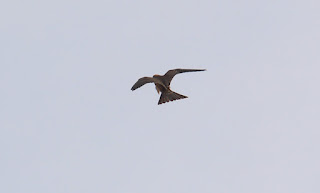 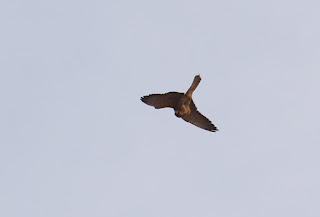 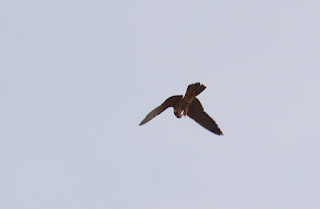 A Wheatear on the strawbales, hinted at what was round the corner. We checked out the southside of the plantation; several Wheatears were feeding in the stubble field, with a Brown Hare and another Redstart fed on the field edge. A Great Spotted Woodpecker announced itself by calling loudly as it flew overheard.

Round on the southside, we paused a while in this famously good spot. A fine male Redstart was showing along the hedge, with a more skulking female. A couple of Yellow Wagtails flew over and flocks of Linnets bounced around the stubble. A family of visitors made their way up the otherside of the hedge, pushing the Redstarts closer to us - great! 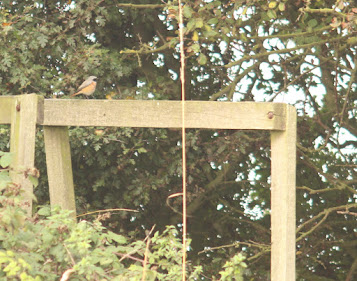 A yellowy warbler dived in to the hawthorn in front; presumably a Willow? It then appeared on the edge of the bush, turned its head, revealing a big orange beak, pale lores and a curious peaked head- Icterine Warbler!! It then jumped up on to a dead branch right out in the open, enabling all of us to get cracking views. No way! We'd found a good bird. This was a lifer for some of the group which made it all the sweeter. After half a minute, having checked out its pale wing panel, long primary projection and thick blue-grey legs, it flicked off into the plantation, leaving us all beaming like Yorkshire cats. 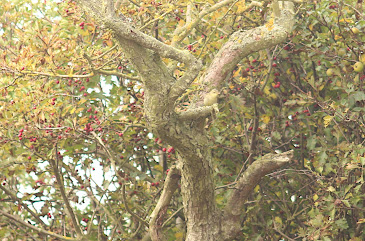 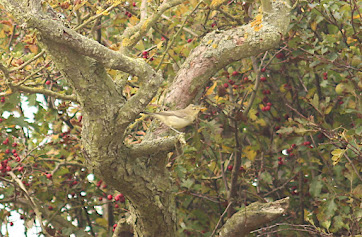 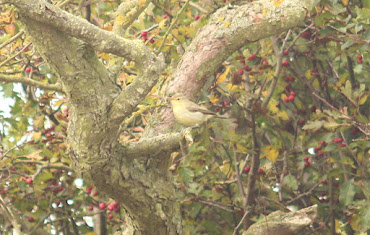 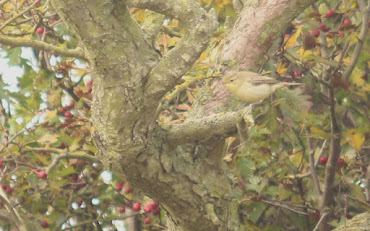 The Hobby then gave us one last fly past. 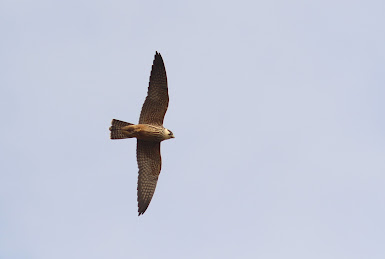 My phone beeped and to my surprise, Vicky had sent me a pic of what looked like a Pine Hawkmoth sitting on my drying shirt on the washing line! Nuts - this would be a first for our garden, so I messaged back asking her to please scoop it up in a tupperware. More of that later...

Very happy, we wandered back towards the lighthouse and lunch. Our third Tree Pipit flew over, but there was no sign of the Yellow-browed Warbler reported from the cottage gardens.

After lunch, we checked out Thornwick Pool, where the juvenile Garganey was showing beautifully, preening right in front of the hide. The juvenile Little Stint was less obliging, feeding at the back of the pool. A solitary Tufted Duck, several Teal and Dunlin were at the pool too. We decided to do a loop of Thornwick, the clifftops and Holmes Gut. It was pretty quiet, with sunny skies and a strengthening southeaasterly sapping our energy. We ploughed on, with little more to show for our efforts. 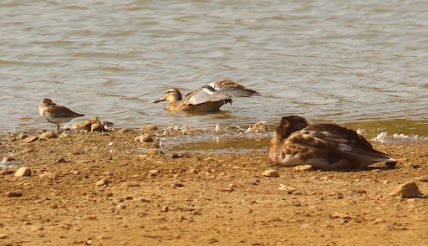 Having managed to resist the temptation of a beer in The Viking, we waved goodbye to some of the group, then went back to the Outer Head to do one last scout round the lighthouse grasslands and the motorway. Little stirred though we half-heard what might have been a Yellow-browed Warbler. Three young Swallows sitting on the fence seemed quite content and watched us as we wandered back to our cars and departed. A fine day, in great company. 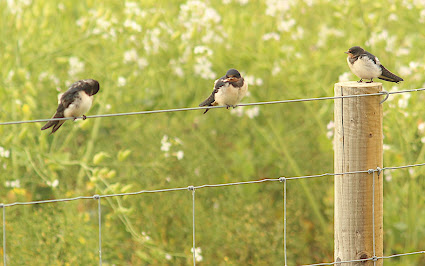 So, that Hawkmoth.  I got back and to my delight, Vicky had contained this large insect in a pack lunch box. Gorgeous! I uploaded a pic to Twitter and somebody pointed out that this wasn't in fact a Pine Hawkmoth - which would have been a good find in our little garden - but an even more amazing Convolvulous Hawkmoth, something I'd only ever seen before at Spurn! Incredible. With a little gentle encouragement, it spread its wings revealing a lovely pink and black-striped abdomen. Thanks Vicky!