Up with the lark

The Lower Derwent Valley
Early start in the LDV was worth the effort, with a smart drake Garganey on the pool at Wheldrake and the whole place alive with singing warbler and displaying waders. The water has dropped now, though is still high for the time of year. A little later a Wood Sandpiper got up out of the refuge and flew around for a while calling. It appeared to head over towards Swantail. The east wind got up as I headed back to my car at about 7am, though the hoped-for Black Terns hadn't made an appearance. Intriguingly, a duck flew past with a couple of Tufted Ducks which looked very much like a Scaup. Sadly they landed out of site on the refuge...At least two, possibly three Cuckoos were a welcome sound.

On to Thorganby which had dried up completely. Another Cuckoo calling.

North Duffield Carrs still had plenty of water and a scan revealed a pair of very active Garganey which spent the next hour or so flying all over the place. At one point one bird landed in the pool in front of the hide.

Three terns heading east should have been Arctic but were Common. A Ringed Plover called overhead and a single Dunlin flew off high east. 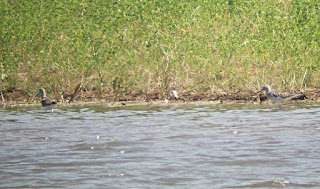 In the afternoon got out again for an hour so went down to Hes East. Had a look at the western scrape first where last week's Temmick's had been. Three Greenshank - nice! On to the main lake to sit for a while to wait for a White-winged Black Tern to arrive. Sadly it didn't. However, after sitting for 20 minutes, I stood up for a scan only to flush a Turnstone from the shore about a metre away! It must have been creeping along the north shore out of sight of each other until it reached me. Mad. It flew across the water and landed on a pile of stones. How apt. A decent wader this far inland- standard fayre at my old haunt of Grafham Water, but my first in the York area. 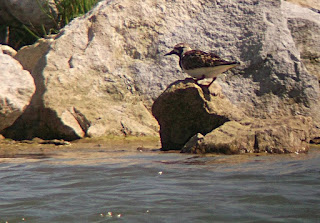