Sometimes you can be lucky

Had a couple of meetings today at Spurn, one of which, a walk round the new YWT site of Kilnsea Wetlands was something I had been looking forward to. I packed my scope and bins as I planned to do some birding before heading home. A text from Andy Gibson said "bring your bins..."- yes, already on it, mate, I thought, but then when I downloaded the second half, I was stunned to read "...Roller on the Point!" Yikes! Not a British tick but a much wanted Yorkie tick and one of those birds that I just can't see enough of.

A painstaking drive ensued with a few messages from birding mates, with updates on what was going on. Sadly, as I approached Easington I got a message saying it hadn't been seen for over half an hour after it flew north over the Warren. Doh! Anyway, I pressed on. Arriving at Long Bank I pulled up thinking it would be as good a place as any to look for the Roller if it was moving north.

I immediately noticed a bird poking out of the top of a hawthorne along Long Bank, my pulse quickened. Getting my scope on it I was surprised to find I was looking at a Golden Oriole! Mad. Only at Spurn! A Yorkshire tick, a stunner to boot but I couldn't help but feel a bit disappointed, hoping that I had relocated the Big R. I watched this cracker for a few minutes then thought I would head over to Sammy's Point, after Steve Exley told me he doubted anybody had looked there. No sooner had I arrived than Steve rang to say it was now back at the Blue Bell. Panic! Back along the road - slow past the horse riders - on to the Blue Bell. Gone. Bugger. Time was ticking by. Fortunately, my first meeting was with Adam Stoyle who had already seen the bird and didn't mind me delaying for a few minutes.

I headed over to the Warren a bit disappointed but hoping the bird would turn up. We got into our meeting and then suddenly the radio crackled to life to say the bird was by the Borrow Pits. Excuse me a moment! I shot out of the centre and into the field with a sprightly Barry Spence and Sue who had a radio. As we made our way along the path the radio informed us the bird had now flown over towards Canal Scrape. Blimey, this bird was flighty! We headed over there. Barry and Sue headed down the road towards the Blue Bell, I decided to walk along the bank towards the Crown. I carefully made my way, checking all bushes, fences etc and keeping one eye on Barry and Sue. After they got passed the car park I could see them looking seriously into the field. I assumed the bird must be on the back of he hedge alongside the Canal Scrape where I knew there was a fence line and a pile of concrete. It must be on there. I crept along so that I could view round the back. But still I couldn't see the bird - where was it? This was crazy. How could I not see a turquoise bird the size of a Jackdaw?!

I edged further and rechecked where the other guys were looking. Could they be looking on the fenceline along the foot of the bank? Most of this was obscured by the hawthorns. Perhaps more to the left. Oh sh*t - there it was - a stunning bright blue and orange bird sitting on a fencepost against vivid green vegetation no more than 15 metres away! I got my scope on it -an optical orgasm - then my phone rang - Steve Exley - telling me not to go any further as I was going to flush it! I explained that I had not been able to see it and without a radio didn't know where it was sitting. As I watched the bird scanned around apparently quite settled. Suddenly it took flight and headed straight across the field and away over the Blue Bell.

I headed back to the Warren, elated but feeling a bit bad that I had probably flushed the bird. Fortunately, everybody present had had great views- mine were possibly some of the closest, but also maybe the briefest! I just prayed it would be refound and that I hadn't inadvertently prevented anybody else seeing it.
I got a bit of stick back at the Warren, but I think it was all in good humour as people realised my predicament and they had all seen the bird earlier anyway. A great bird and a brilliant find by Martin Garner.

Later on, I had a walk around Kilnsea Wetlands - a fantastic new site built by the Environment Agency as compensatory habitat for Beacon Lagoons which are threatened by sea level rise. They will shortly be handed to Yorkshire Wildlife Trust to manage as a nature reserve. Not many birds here though a smart Cuckoo showed well and a Hobby glided overhead. After this, I headed over to Sammy's with Andy to have a look around. Right at the end, a bird flew out of the bushes and landed along the hedge- another Golden Oriole, this one a first summer male. Smart. A quick look at the Point revealed very few birds, just plenty of woolly bear caterpillars. Spurn. What a place! 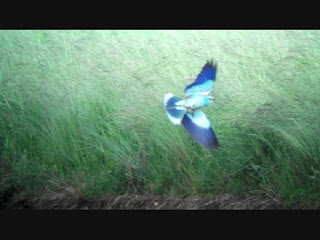 Departing Roller (taken at Aldbrough a two weeks later, but you get the idea)
at June 08, 2012