Dawn at the Ings 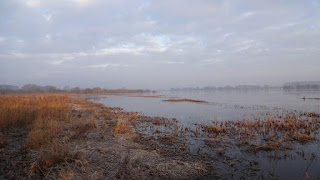 Despite the fog in Bishopthorpe, I resisted the urge to return to bed and headed as planned to Wheldrake Ings. A Bittern had been reported early morning a couple of days ago, so I thought this would be worth a try. The Ings looked eerie in the early morning light, with a low mist hanging over the meadows. Most of the shallow water was frozen although large areas remained ice-free. Large numbers of gulls were departing as I walked along the river-side path to Tower Hide. I had a quick look but soon carried on round to Swantail where the light was much better. There was no sign of the Bittern in the reedbed, though I was not surprised. Out on the water, there were far fewer ducks than I have seen recently, though Gadwall, Pochard and Tufted Duck numbers had increased.

After much scanning, I suddenly noticed the vertical white breast stripe of a drake Green-winged Teal among the throng of common stuff. Another birder had joined me in the hide shortly before, so I told him about it. The Teal promptly swam into the reeds and out of sight -typical! Fortunately, the bird was very active, and soon swam back out into full view, with a gang of male Teal that were busy displaying to a couple of females. The GWT had a similar display to the Eurasian birds, with the body lift and head jerk, but without the tail flourish. For the next twenty minutes the bird performed well, off and on, as it swam about. I had major fogging issues with my scope and so my dodgy digiscoped images were dodgier than normal, though you can just about make it out. I was starting to freeze, so I headed back, with a pause in Tower Hide to look through the Wigeon, now the light was better. 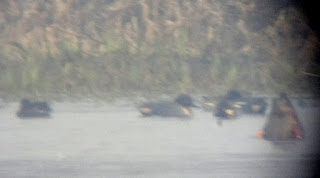 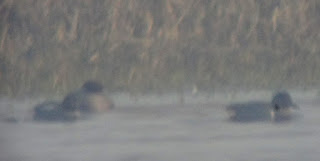 Distant shots of the drake Green-winged Teal, through a fogbound scope! The North Cave bird was still present this morning, so this is a different bird.