An hour down at Rufforth to try and find a Glaucous Gull for my York year list failed, despite the gulls showing well in the flooded sheep field opposite the tip. However, a better bird was on offer in the form of an adult Caspian Gull, that suddenly appeared among the Herring Gull throng. A smart bird, with characteristic high-chested, sloping backed profile, small head and long thin, pale-yellow bill with a dark subterminal mark. A glimpse of the long pale tongue on P10 as the bird preened proved the ID, though it was barely needed as I had no doubt. This is my first Caspian Gull of the winter; they have been rare this season, although I haven't put in a lot of time. Three Lesser Black-backs were a sign of spring and a noticeable reduction in Great Black-backs suggested birds were beginning to head north to breed. 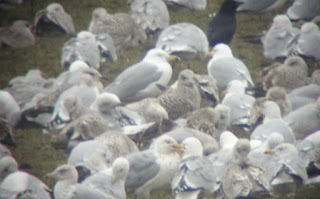 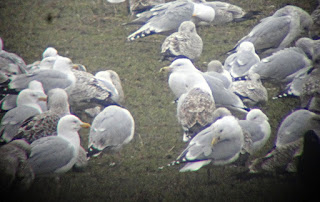