With all this weather, I had a hunch that there could be some birds around and with the report of some Scaup at Hes East and a Rock Pipit at North Duffield Carrs, it was time to get out. Family stuff done, I headed out in the afternoon, picked up Emanuela and headed for Hes East. Large grassy patches were clear of snow among the buildings on campus, and a mixed flock of Meadow Pipits, Redwings, Fieldfares and Blackbirds were feeding. We watched one Redwing which managed to get a large worm. Great stuff! 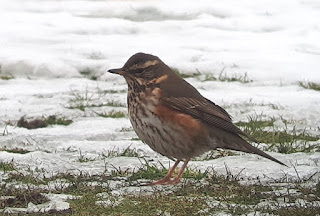 Down at the lake, the wind was very cold and we found large numbers of Fieldfares feeding on the grass along with five Dunlins and a Golden Plover. We soon found the five Scaup, which seemed to be three adult females and two first winter females, the latter with smaller white face patches and more uniform brown plumage, lacking the adult's more mottled grey and buff flanks. Smart birds. Around the lake were several Snipe, a Redshank and plenty of common ducks. 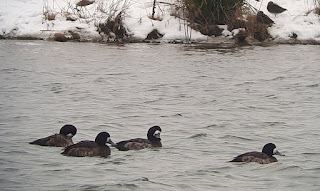 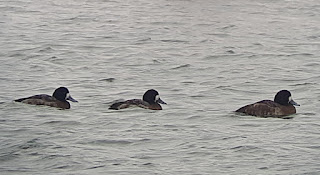 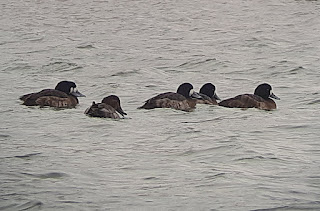 The bottom photo shows the five with a female Pochard third from the left.

Next to North Duffield Carrs where old mate Alan Whitehead picked up the Rock Pipit feeding on the ice. This was a smart bird, a Scandinavian bird as expected, with a decent white supercilium and greyish cast to the head. Overall a smoky, dark bird, with dark legs and bill, sullied underparts and greyish outertail.Shame my photo is rubbish! Two Barn Owls were flying about, one of which nearly flew into the hide! 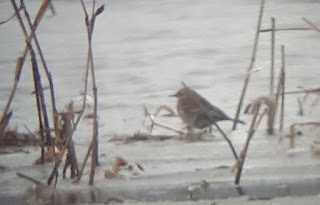 Last, we headed for the snowbound Wheldrake Ings where we met up with Duncan to do the roost. After a bit, we did the long muddy slog to Swantail Hide where views were much better. The gull flock was huge and it was easy to get Gull Blindness! The blizzard like throng sat tightly packed on the ice and it was hard to focus on individuals. After a bit, Duncan called an adult Med Gull, and I soon picked it up. However, on comparing scopes we realised we were looking at two separate birds! Both were smart with good black hoods and bright red beaks, although 'mine' still had white on the forehead, when it woke up for a spot of preening. Meanwhile, Craig had found a Little Gull over at Bank Island but we had no chance of getting back there quick enough. Nothing much else of note, apart from three squealing Water Rails and plenty of Mink tracks along the boardwalk. 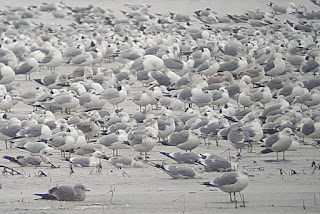 My Med Gull - centre left, asleep with a black head. 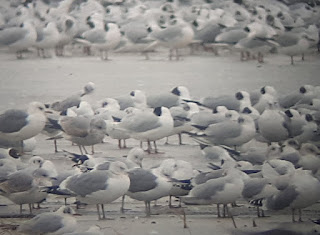 Duncan's Med Gull, same pose, but 20 metres to the left of the first!