Milder air finally arrived from the south and the temperatures got above freezing for the first time in three days. The snowmelt began in earnest and Frank 1 departed first thing, with Franks 2 and 3 having a quick bit of fruit for breakfast before heading off strongly. They didn't come back. I picked up Emanuela again and we headed up to Castle Howard, where it began snowing again! 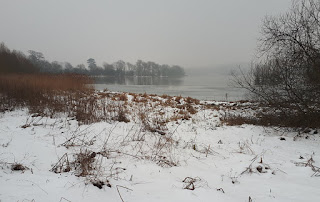 The lake was partly frozen and seemingly bereft of birds, although as we walked down the piping of unseen Teal hinted that there were some birds still present. We headed down the lake pausing to check the ducks. Shortly, Emanuela pointed out a smaller duck that we had flushed from the lake edge - a female Smew! Cool! It flew along the lake and landed in the northeast corner. We headed down and found the smart little duck cavorting with the local Goldeneye. She didn't seem impressed with the drakes head-tossing efforts and headed off on her own. Four Mandarin and six Shoveler were the only other birds of note. 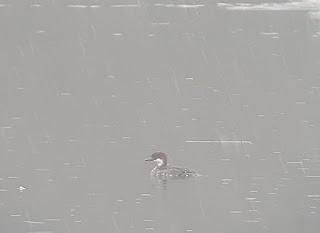 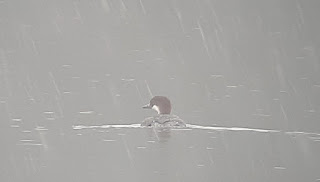 The snow began to come down heavily so after a while, we felt we better get out of dodge before the road became impassable. As it turned out, the snow had turned to rain by the time we had walked back so the road was fine. We headed back to the LDV, checked Aughton - frozen - before going to North Duffield Carrs. No sign of the Rockit, but stacks of ducks, plus one Whooper Swan.