I have tried to find Small White Orchid at Ashes Pasture YWT for the last couple of years without success. Firstly, they are small, second, they are rare and there are not many at Ashes Pasture, third, it is a big site and fourth, their flowering period varies year to year and doesn't last long. So, with the odds against me, I wasn't surprised not to track one down in previous summers.

This year, however, I would be spending a whole morning looking as part of a survey of the site. The Natural England Field Unit - a bunch of top botanists from across the UK were surveying the wider nature reserve and I decided it would be good to search for this diminutive orchid and GPS it, so that we could monitor the health of the population. SMO is a northern species and so the plants here, int he uplands of the Yorkshire Dales, are at the southeast edge of their range. 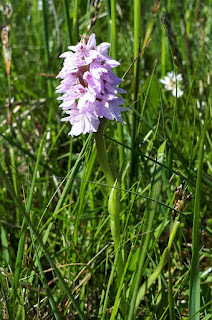 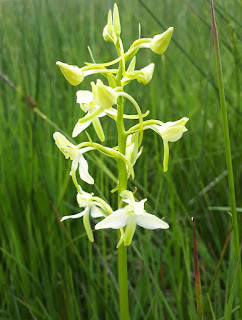 After four hours, our time was up. Still no Small White Orchid. Were we overlooking them? Had they stopped flowering already? Had they vanished from the site? We had checked the key parts of the site where they had been recorded in previous years time and time again. But no sign. It had been a wonderful four hours, but no cigar.

We headed up to Natural England's office for a brew and a debrief. The team had found some superb stuff on the new land at Ashes Pasture and were effervescing with enthusiasm. This lifted our spirits. As we were about to leave, Colin, the Ingleborough NNR site manager suddenly asked if we would like to have a look for Small White Orchid, as there was a colony on the slope of Ingleborough, just above the office. No way! We all filed out on an orchid twitch. Shortly, having walked through some beautiful flower-filled upland meadows, in the shadow of the mighty Ingleborough, we came to a grassy knoll. To my utter delight, Colin said - "there" and pointed to a little orchid poking up through the grass. My first Small White Orchid! Fantastic. Looking around, we spotted another, and another. There were at least a dozen here. They had started to 'go over' with some of the little flowers on the spike already shrivelled and dead, but plenty were still vibrant and white. 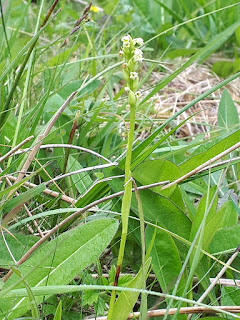 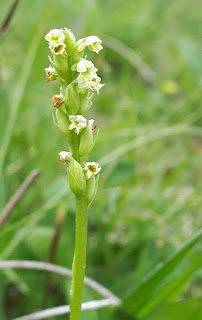 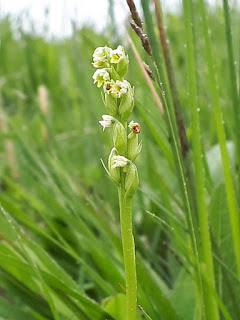 Gorgeous and well worth the wait! Nearby, we found some Fragrant Orchids growing in some acid grassland among a colony of Heath Spotted Orchids. Surely Heath Fragrant?! And as a finale, Colin showed us the magnificent Mountain Eyebright, an absolute giant! 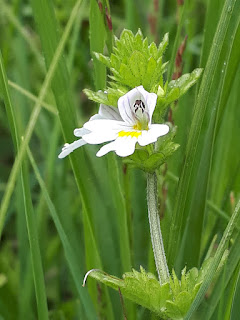 The magnificent Mountain Eyebright on the slopes of the mighty Ingleborough.