I don't get down to YWT Potteric Carr as much with work these days, due to my focus being on North Yorkshire. It was, therefore, a treat to visit this afternoon and to show the kids the breathtaking Starling murmuration down at Huxterwell Marsh. It was certainly worth the walk. Gangs of Starlings piled in from all points of the compass, assembling into a sinuous, living airborne leviathan, which snaked across the treetops, balling up into twisted shapes, before reaching out across the reeds like smoke from a winter bonfire. The BBC's Strictly has nothing on nature!


If you want to see this spectacle, head for the East Scrape Screen, about half an hour's walk from the visitor centre, at the end of the blue trail. Today, the Starlings began their dance about 3.30pm and performed well until c3.55pm when they poured into the reedbed like an avian cascade. It was still light and we got back to the centre by dusk. 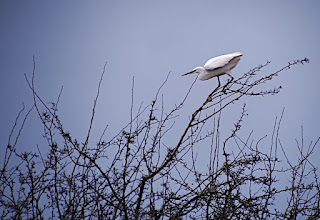 
Plenty of other stuff about including a Peregrine, two or three Cetti's Warblers, three Little Egrets, several Lesser Redpolls and Siskins and a fine male Marsh Harrier hunting on Piper Marsh (below). 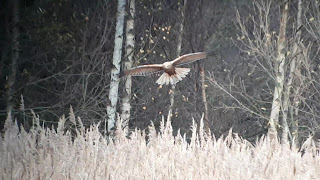