This weekend was mostly about the 'Dad' and less about the 'Birding', as Vicky was in London, so I was in charge of the nippers.

On Vicky's return, my reward was to scoot down to Wheldrake Ings mid-afternoon (Sunday) to see what was going on in the valley. I popped into Bank Island, but not a lot was doing and I then got news that the drake American Wigeon had been relocated on the refuge at Wheldrake by Gary and Wendy Flakes.


I headed down there with Duncan, pausing to admire an incredible double rainbow right over the ings, which turned the floods inky black, a slick among golden grass. 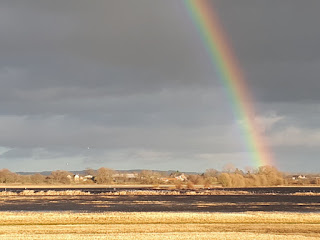 Fairly soon, I picked up the familiar pale pepper grey head and shining green eye stripe of our target, the American Wigeon; a very smart Nearctic duck. He performed well, providing the best views of this individual I have had during the last few winters. He mainly stayed with a gang of unpaired drake Eurasian Wigeons that were displaying excitedly to an unpaired female. He did a cute little stand and wiggle to show off, but she didn't seem overly impressed. 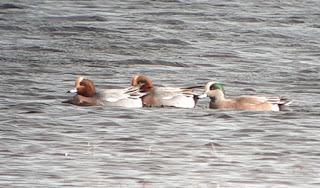 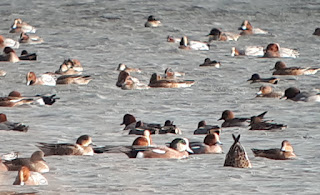 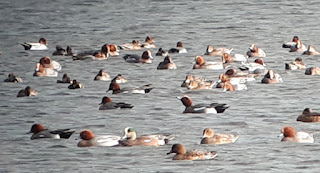 Hordes of birds were flying around and several hundred Teal materialised. I mentioned that I had seen plenty of American Wigeons and Green-winged Teals here over the years, but never managed to see both in the same day. A few moments later and I realised one of the Teal facing me had two striking vertical white stripes on the edge of his breast and virtually no pale border to his green eye patch - Green-winged Teal! Unbelievable scenes! I was keen to get Duncan on the bird which was going to be very difficult given the large number of Teal milling about in a dense swarm. I opted to give him my scope, but that was a mistake as it moved out of view and he didn't get on it. We tried hard for the next hour to relocate the bird, but many of the Teal had swum or flown out of sight behind the long grass. This took the shine off my first Wheldrake Yank Duck Double somewhat, but the corking views of the AmWig made up for it.


We headed back up to Tower Hide to have a go at the gulls before dusk stole the light from us. Sadly, this was to no avail, although we got great views of the semi-resident male Peregrine which was not happy with the presence of a Buzzard, in fact he was livid for some reason. He repeatedly dive-bombed his adversary at incredible speed whilst loudly shouting his head off. I suspect if he had made contact with the Buzzard, that would have been game over for the larger bird. 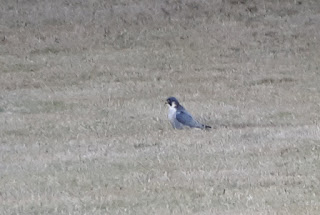