OK, well not the moth which is the real Kentish Glory, but a glorious Kentish Plover, which Duncan Bye and myself enjoyed, in autumnal sunshine on Redcar beach. 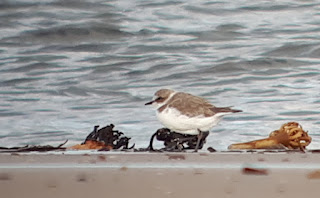 A declining species in Britain, KPs used to breed until habitat destruction pushed them out decades ago. So, despite them being named after the county of their discovery, they are no longer a native of that county, nor anywhere else in Britain for that matter. Illustrating their rarity perhaps, this bird is only the second I have seen in Britain, the first being many years ago in North Norfolk. 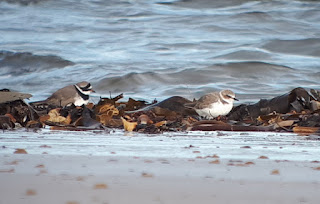 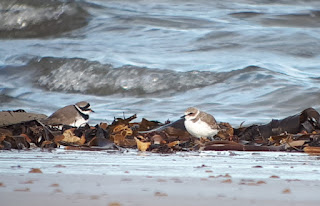 KP together with a Ringed Plover. Note smaller size, paler upperparts and differences in head and breast patterns.

This one seemed very content, feeding with Ringed Plovers and Sanderlings, among the kelp-strewn tideline. Good numbers of other birds were present including a smart Long-tailed Duck, c50 Common Scoters and c20 handsome Common Eiders, riding the rough surf. 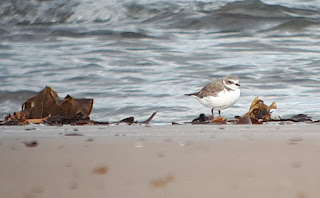 Difficult phonescoping due to the strong wind! Apologies for the shake.

We headed on to South Gare, where a few Twite were with the local Linnet gang, two Snow Buntings flew around calling and a fine second-winter Mediterranean Gull had joined the local Black-heads to scrounge for crusts, from the car-bound picnickers.

Nearby, a Red-throated Diver was behaving strangely, coming close in to the beach. On closer inspection, it was apparent that this sad juvenile had hooked itself on some discarded fishing tackle. The hook was clearly visible in the bird's gape and the head was wrapped in nylon line. It was still fit, so we couldn't get near it to help, and the local gulls chased it into deeper water. I felt helpless; such a beautiful bird facing a grim and totally unnecessary death. Yet another victim of our carelessness. This put a downer on the end of an enjoyable couple of hours birding Teesside.