Four drake Red-crested Pochards (found by Duncan Bye) at Aughton Ings provided an exotic splash of colour on a relatively drab autumn afternoon. Three were quietly hanging out on the edge of the Willow coppice, strikingly handsome among the monochrome vertical reflections, while another was mixed in with the Aythya flock and occasionally displaying to a female Common Pochard. This spectacular duck undoubtedly occurs as an occasional vagrant from the continent, but the picture is confused by many escaped birds and feral breeders, so it is impossible to know where this quartet came from. Nevertheless, they are a lovely bird to see. Also noted, 58 Pochards and c120 Tufted Ducks. 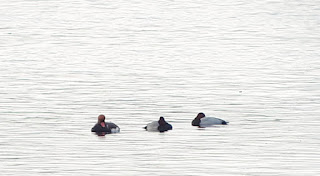 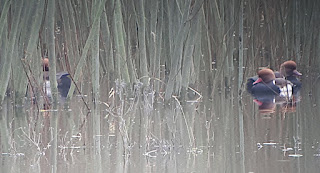 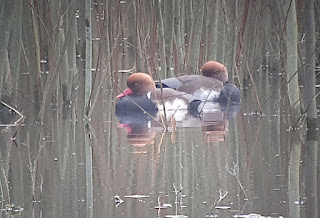 On to North Duffield Carrs via Bubwith Ings. The water levels are high in the valley now and attracting lots of birds; my highlights were two Marsh Harriers, an adult female Peregrine, 29 Ruffs, 3 Dunlins and c500 Golden Plovers. No sign of anything rarer among the plovers though one Goldie with a black belly was interesting.

Classic LDV scene: Golden Plovers and Lapwings, with feeding Ruffs in the background.
at November 03, 2019