Work has been so crazy busy that I have barely had any brain power left to blog, so apologies if you have been missing my drivel. I have still managed to escape to do some birding and a lot of gigging, so it has been a pretty enjoyable time too.

Looking back, as the month draws to a close, here are some of the bits and bobs I've seen.

The valley is very flooded now. A male Cetti's Warbler has been hanging out by the Pocklington Canal at East Cottingwith and today showed well, scolding my presence. It occasionally sang too, the first time I've heard this distinctively abrupt outburst in the York area. It came very close, and I managed a bit of video with my phone.


From the same spot, a first-winter drake Scaup could be seen loafing with Tufted Ducks on the Wheldrake Ings refuge.


Another Scaup was present on the floods by Aughton Church followed by two first-winter females on Wheldrake Ings, from Tower Hide. 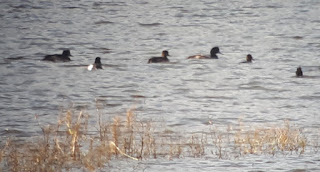 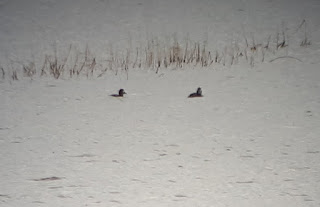 Two Scaups. @Recordshotmyarse would be proud. 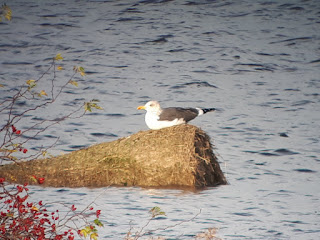 This adult Lesser Black-backed Gull was enjoying some winter sunshine on a hay bale at North Duffield Carrs. This species is not very common in the York area in winter. Four Russian White-fronted Geese were at Thorganby, before flying off north.

Went for a quick look at Wheldrake with Sol. The Derwent was pouring out of its channel on to the Ings (exactly as it should be!) and so wellies were essential. Nothing much of note, but large numbers of wildfowl, including over 200 Pintails and probably several thousand Teal and Wigeon. Impressive stuff. 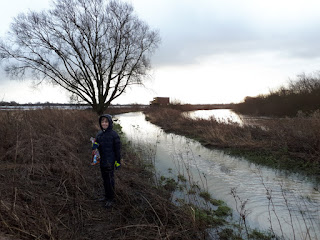 A Scaup was on Bubwith Ings viewed from NDC and a cool murmuration of Starlings over Aughton attracted a Peregrine. 15 Ruff, including the returning white-headed male, were hanging out on the riverbank. 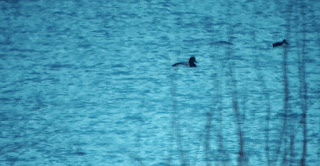 Scaup in the gloom.

I was a bit dismayed to find the gate locked at Castle Howard lake but whilst pondering what to do, I heard the distinctive call of a Cetti's Warbler from the nearby swamp. After a bit of patience, I eventually got a brief view of the skulker, and managed to record a bit of it's call. This is the second record of Cetti's at Castle Howard; the first I found in January on a York Bird Race a couple of years ago. A real bonus. I had a look on the lake, but few ducks present, possibly due to the early floods in the LDV meaning that incoming waterfowl had headed straight there. Nevertheless, about ten Goosander, twenty Goldeneye, c50 Wigeon, c75 Teal and half a  dozen Tufted Ducks were present. Not much else of note, besides a large Siskin flock in the trees on the opposite side of the lake, and a Nuthatch calling from behind the caravan park. On to the LDV, I checked out Melbourne first, where a Little Egret was on the bank of the Pocklington Canal. I then headed down to Ellerton. Very few birds present, mainly because of the guy walking his huge dog down the floodbank and a hunting Marsh Harrier quartering the flooded meadows.

Looking to the north, I spied two distant swans in the middle of the ings, which looked very interesting, sporting short necks, rounded heads and seemingly mostly-dark beaks. With zoom power, my hunch was confirmed as I discovered two adult Bewick's Swans! Class. 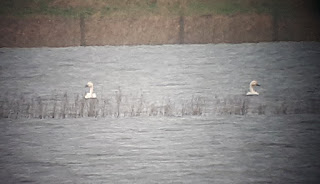 
Bewick's Swans used to be as common as Whooper Swans in the LDV in winter, but alas they are now rare visitors. Their decline is presumably down to their overall population decline linked to hunting in Russia, plus milder winters meaning fewer come over from the Low Countries these days. Lovely birds and a real joy to watch. I put the news out and then shortly they took flight and headed towards me, following the river. To my surprise, they banked and headed straight towards where I was standing at Ellerton Church! I urged them to land on the water in front. but they changed course and headed south down the ings. Duncan and Peter turned up as I was leaving, and I gave them the bad news.

A few miles and minutes later, I pulled up at Aughton Church, only to see the swans heading past. I filmed them with my smartphone as they made their way down the Derwent. They banked over to the east and looked like they were probably heading for Bubwith Ings to join up with the wintering Whooper Swan herd.

Two first-winter drake Scaup were present on Aughton Ings, along with a large mixed flock of Pochard and Tufted Ducks. Ten Goldeneye noted plus a Curlew on the riverbank. 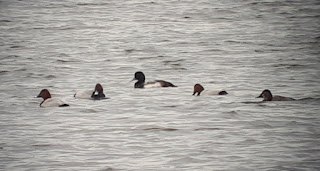 
On to Aughton, I met up with Duncan, Peter and Adam, and after a bit of searching, I relocated one of the Bewick's in with the Whoopers. We walked round to get closer views and Duncan picked up the second bird roosting at the back of the flock. Very nice indeed. Time was getting on, so after soaking up awesome views of these two gorgeous Siberian visitors, I headed off. 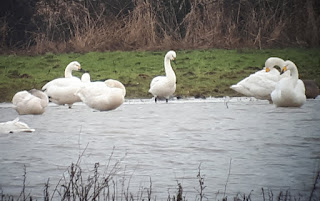 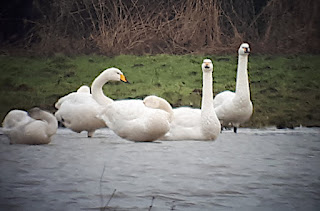 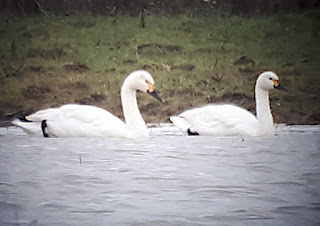 Bewick's Swans, generally cuter in appearance than the larger Icelandic Whoopers: note the rounded, less wedge-shaped head compared to the Whoopers, plus the shorter neck, smaller size and the small rounded patch of yellow at the bill base.