From Iceland to the Caspian!

Ever since the closure of Rufforth landfill site, large gulls have dwindled considerably in the York area. Only a few hundred come into roost at Wheldrake Ings now, so the chance of one of the scarcer species has really reduced.

The news that Tim Jones had found a first-winter Iceland Gull in a field near Barlby (feeding on abbatoir waste, delightfully!), was, therefore, very unexpected and exciting, so once I'd left Sol in the capable hands of a mate and his Dad (they had pre-arranged to go indoor climbing) I shot down the A19 from York.

Chris Gomersall had seen the bird most recently in a different field, but the flock had flushed and moved back to where Tim had originally seen the bird. We gave it a good twenty minutes but there was no sign in the dense loafing flock, though many birds were obscured. A couple of adult and one first winter Lesser Black-backed Gulls were a welcome sight - hopefully a straightforward addition to tomorrow's York Bird Race list. A covey of six Grey Partridges in the adjacent field were nice too. Meanwhile, many of the gulls were heading over to the original field where they were feeding, so we decided to head back round.

After a few minutes and as more and more gulls descended, Chris announced that he'd found the Iceland. Excellent! The bird showed well, feeding with the flock, getting a fair bit of hassle from the larger species. 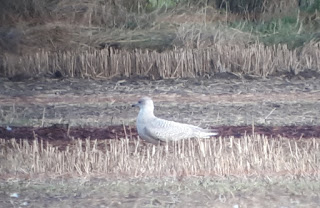 A little later and shortly after discussing how a flock of this size (500+) should really hold a Caspian Gull, and Chris did it again, stating he'd found a first-winter Casp! It was a real corker and proceeded to show well for the next half and hour or so, until we gave up due to cold and the gathering gloom. Strangely, the bird seemed to have nervous tick, where it frequently flicked it's head up. It may have been swallowing something, although it seemed to do it even when it hadn't been pecking at the floor. I never did make it to Wheldrake for the roost! 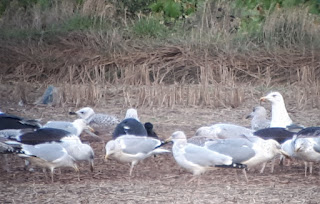 First-winter Caspian Gull, at the back of the flock on the left.