The days are drawing out gradually and the noise of the natural world is responding, with Song Thrushes, Blackbirds, Great Tits and Dunnocks all singing at dawn now. Nevertheless, it is still too dark before and after work to do any birding during the week, so birding is limited to the weekend.

Today, I headed down to Allerthorpe Common to have another look for Lesser Spotted Woodpeckers. It felt mild and blue sky pushing in from the west was encouraging the birds to sing, so I felt optimistic. However, not a single woodpecker of any species put in an appearance, but it was nice t spend some time in the woods. A single Redpoll, several Siskins, Marsh Tits and a Nuthatch were the highlights. 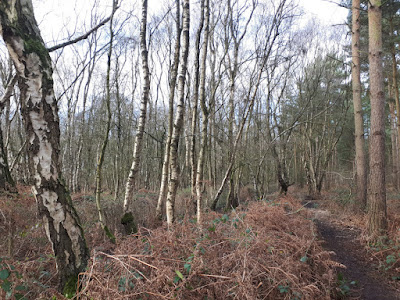 On to the LDV and I passed a cream-crown Marsh Harrier circling over a field just south of Thornton. As I drove by, it folded it's wings and stooped causing an explosion of panicking Wood Pigeons from the field. The sky cleared nicely by the time I reached East Cottingwith and nine Whooper Swans stood out, stark white against the blue flood. Lots of birds present on the refuge, with nine Black-tailed Godwits flying about with the Lapwings when another Marsh Harrier flushed the resting throngs. The wintering male Cetti's Warbler was still in 'his' reedbed, proffering several abrupt bursts of song. Hopefully, he will find a mate come spring.

Ellerton was unusually bone dry, so I missed out Aughton and went over the Derwent to North Duffield Carrs. The two drake Scaup were looking smart among thousands of ducks and plenty of Whoopers. Over on Bubwith Ings, c750 Golden Plovers dropped in, with a handful of tiny, scurrying Dunlin. A third Marsh Harrier quartered the grassland to the rear of the reserve.

I headed to Riccall to check out the gulls feeding in the field by the A19. I immediately picked up the smart first-winter Caspian Gull, but despite a thorough search could not locate the Iceland Gull, which had been reported earlier. It wasn't easy phonescoping from half a mile in strong wind, but you can just about pick out the Casp in the middle.